Back in school, we were taught to show love and respect to our national anthem since it is an important symbol of our country. We even have to go through flag ceremonies every morning as proof to this devotion.

However, it seems some you couldn’t really teach everyone respect. Nonetheless, a man was arrested for his disrespectful attitude in Clark, Pampanga. 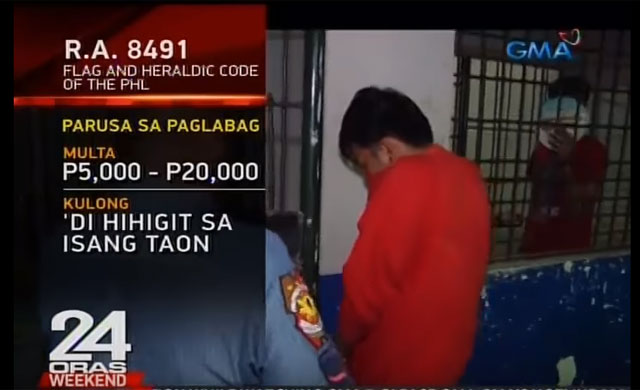 The 20-year old man was identified by GMA’s “24 Oras” as Bayle Einstein Gonzales. Apparently, Gonzales refused to stand up to show respect while the national anthem was being played inside a movie theater.

According to the report, Gonzales was already told by another man, Elmer Cato, to stand up. The latter was the Charge D’affaires to Iraq, or a diplomat who heads the Iraqi embassy in the absence of the ambassador. Cato was also in the cinema at the time.

Instead of standing up, Gonzales refused and ate his popcorn instead. Cato reported that he told Gonzales twice.

After the movie, Cato reported the incident to police officials who then arrested Gonzales.

Gonzales is denying the allegations. He is facing charges in violation of the Flag and Heraldic Code of the Philippines and could be fined from Php5,000 to Php20,000 and can be jailed for as long as a year.

If you think the punishment was too harsh, an even stricter compliance on showing reverence to national symbols is contained in House Bill 5224 which was already approved on third and final reading and is already transmitted to the Senate.


Thus, instead of facing the consequence, better to stand up for the whole minute and thirty seconds every time ‘Lupang Hinirang’ is being played anywhere.

After all, the National Anthem is restricted by the National Historical Commission of the Philippines to only be played during International competitions where the Philippines is the host or has a representative; local competitions; during the “startup” and “closedown” of radio broadcasting and television stations in the country; and before the initial and last screening of films and before the opening of theater performances.