Filipinos are no longer just dominating reality-singing contests, but also modeling contests too. After going against all odds, Filipino-German model Maureen Wroblewitz outshone other contestants to be named Asia’s next top model Cycle 5, making her the first from the country to do so.

On her Instagram post, she noted how she was often told she was ‘a pretty face with no skills’ but she refused to give up her fight. She wrote and encouraged everyone to follow his or her dreams despite criticisms and other people trying to bring them down. 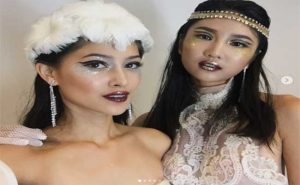 The aspiring super model won a brand new car and modeling career in New York. But before her success, she started out as the shy underdog.

“Before I entered the competition, I really doubted myself. I never even thought I would make it into the competition at all,” Wroblewitz wrote on her Instagram post.

It could be recalled that during the competition, she was often bullied by her other competitors. According to her, she used those experiences to come out stronger and better.

I still can’t believe I’m saying this… but I’m Asia’s Next Topmodel! It feels like a dream and I don’t know when I’ll ever realize that all this has happened to me. This has been such a crazy journey but definitely a once-in-a-lifetime experience I’ll never forget about. Before I entered the competition, I already doubted myself. I never even thought I would make it into the competition at all. But look at me now! 😭 I’ve learned so many new things. I’ve learned about different cultures, languages. I’ve learned about modeling. But I’ve mostly learned a lot about myself. I am stronger than I thought I was and I really don’t give up! I was constantly called ‘a pretty face with no skills’. But little did they know, it would just make me come out stronger and better. It became a perfect motivation for me to prove them wrong and to show them that being inexperienced doesn’t mean you’re a weak model. There were times where I felt like giving up, but I knew that it couldn’t be an option. I was the last Filipina standing and a Filipina has never won before. I wanted to win this for my country – the Philippines and I’m so happy to say that I did. This is all for you guys! We won this together ❤🇵🇭 This experience has made me grow so much as a model and as a person and I’m so thankful for everyone involved. The support I’ve gotten from all of you is insane! I’ve never expected so many people to support me, a weird, clumsy aspiring model 😂 but I’m so grateful for it. Thank you all so much! I love every single one of you ❤ I hope I inspire everyone to do the same thing I did. To follow your dreams and to not let anyone bring you down. Do what you love to do! It’s true! You’re capable of doing anything, if you just go out and try! So work hard, it’ll pay off. ❤❤❤ Thank you @asntm @starworld_asia for this opportunity!! #AsNTM #AsNTM5 #TeamMaureen #TeamPhilippines #PhilippinesOnTop
A post shared by Maureen Wroblewitz (@mauwrob) on Jun 28, 2017 at 9:08am PDT

Nonetheless, despite her strong character, she also felt insecure due to her height and inexperience. Wroblewitz’s height is 168 cm or 5 feet and six inches – the shortest among the 14 competitors.

At the start of the contest, two Filipinas were also in the competition namely Anjelica Santillan and Jennica Sanchez. Both were eliminated early into Cycle 5.