Although Facebook’s Year in Review feature aimed to bring good vibes and nostalgic feels from the previous year, it has gained ire from some netizens. It has been somewhat a tradition for Facebook to do something like this each year, supposedly to give its users a positive flashback of the year that has passed. But each year, it also gains negative feedback.

Who still remembers the post of a grieving parent when Facebook chose a picture of his late child who died that year as the highlight of his whole year? It was the time when Facebook chose which photo has the most comments and like, and then presume it was one of the most positive thing that had happened for that year (which obviously would not be the case for everyone.) 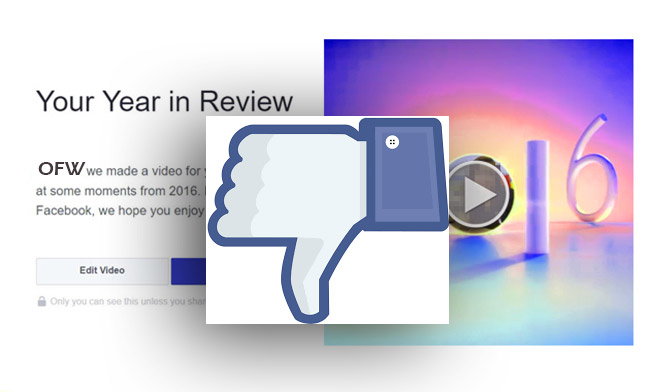 Try it now: How to create your own Facebook Year in Review 2016

The posts were mostly from users who did not really have a pleasant year, and obviously did not want to look back to any of it. Others were disappointed about photos and posts selections (which you can edit, anyway.) 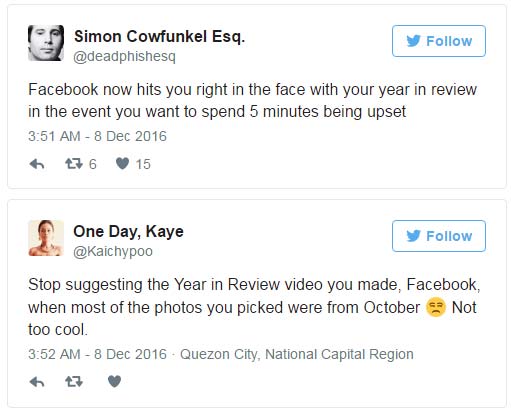 One netizen was disappointed because the selected pictures were from not happy moments, and forcibly made him relieve it again.

Since the feature or app uses artificial intelligence, it did not really consider the kind of photos and posts selected.

Facebook might have dismissed the fact that not all posted materials were from happy moments. It also became a social-media-platform-like-journal where users also post not-so-good memories.

Maybe next year, Facebook would figure it out to fix the algorithm and prepare for Christmas season.