Smokers beware, an executive order banning smoking in all public places is pending for review and approval by President Rodrigo Duterte. If signed without any alterations, smoking in public places, both indoor and outdoor would prohibited. It would include parks, bus stations and even in vehicles.

The executive order was said to be drafted from a Davao City smoking ban, where the current president used to lead for more than two decades. 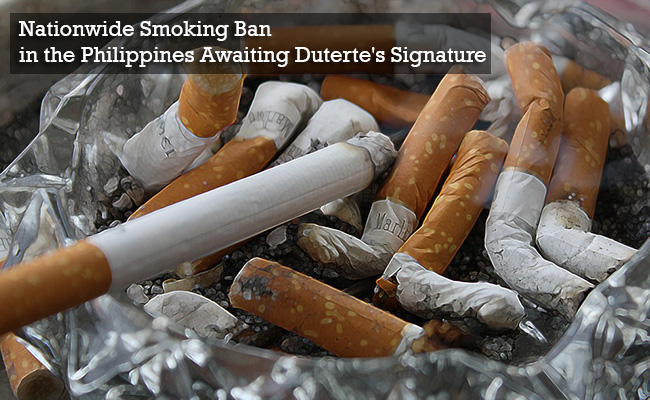 The report was confirmed by Health Secretary Paulyn Ubial’s chief of staff Karl Ubial. The draft executive order was prepared by the Department of Health. “The EO was submitted last week and is up for review by the President,” said Ubial on Monday, October 10.

President Duterte, himself, used to be a smoker, but quitted due to health reasons. He was known to aggressively enforced the city-wide smoke ban while he was mayor, to the point of chasing down smoking divers who violated the smoking ban. The said smoking ban in Davao has been recognized by the World Health Organization as an effective smoke-free measure in an urban setting.

It is also anticipated that a nationwide liquor ban in public places and curfew minors as he has previously stated would also take effect soon.