Another proof that second chances do exist, if one continuously persevere. Roy Lawagan, a security guard working for the Commission on Audit office in La Trinidad, failed to pass the bar exams last 2014 despite being enrolled in a review center. He decided to review on his own and retook the exam last November 2015. He was able to pass this time, and he considers it an early gift for his 27th birthday on May 11. 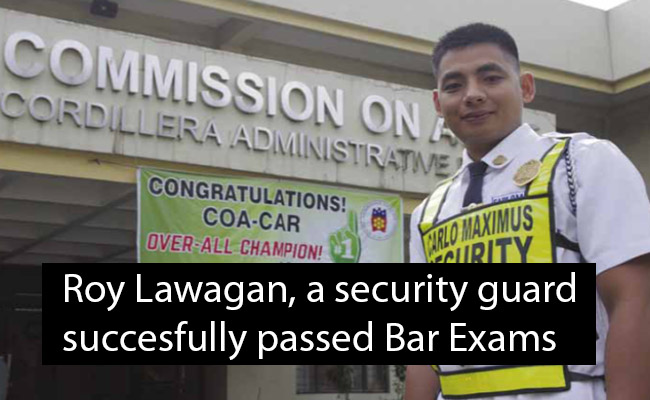 Even after being successful from the 2015 Bar exams, he still reported back to work. According to him, he would stay on his job until May 15 before he ventures to Manila to work at a law firm, hoping to gain experience.

Lawagan’s achievement was not an easy feat. He attended night classes on his first year at law school. During the same time, his wife was also pregnant with their daughter who is now four years of age. He added that it was his father’s dream to have a lawyer offspring.

Some of sisters were able to graduate with degrees in political science, but were not able to pursue law. Lawagan on the other hand, graduated from the University of Baguio where he took up his criminology course before pursuing his law studies at Saint Louis University.