Philippine Entertainment’s “Master Showman”, also known as German Moreno, has passed away at 3:20 am on Friday, January 8. It came a year after he suffered a stroke. He was 82 years old.

The announcement came from John Nite, Kuya Germ’s nephew and also a host in GMA 7’s “Walang Tulugan with the Master Showman. He sent a statement to GMA News Online. He quoted:

“He passed on in the company of his family and friends. He lived a full life, touched so many hearts through the years, and helped make dreams come true for most of the biggest stars in the Philippine entertainment industry,”
“We are deeply saddened by his passing but we are comforted by the thought that his legacy will live on,” 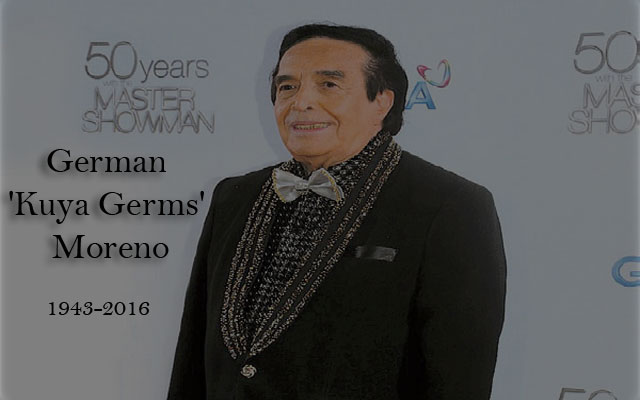 Last January 2015, Moreno was hospitalized after suffering from a stroke, thus he had to rest for several months. He was able to return to his show in June of the same year.

He was also the one to start Philippines’ very own “Walk of Fame” in Eastwood, Quezon City which recognized artists, broadcasters, singers and other individuals who made significant contributions to the showbiz industry.