Just when everyone thought that Miss Columbia would go home with the Miss Universe crown, host Steve Harvey braved what he knew would be an awkward situation and admitted that he made a terrible mistake before announcing Miss Philippines as the real winner of the prestigious pageant. 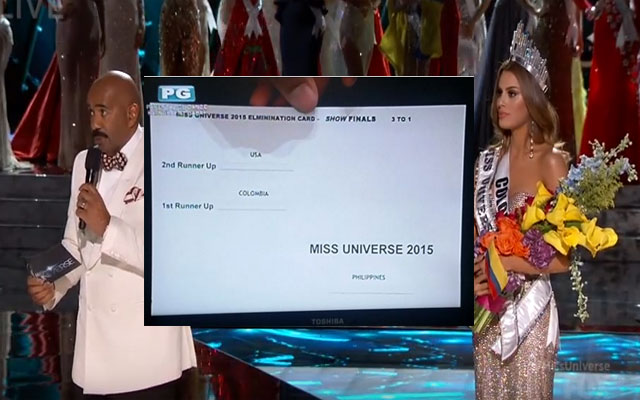 At the moment when everyone held their breath, Steve Harvey first announced Ariadna Gutierrez of Columbia as the Miss Universe 2015. The out going Miss Universe 2014, who also represented Columbia, gave a huge hug to Gutierrez who herself hopped for joy as she waved her country’s flag. Yet, the celebration was cut short in an awkward way when Harvey admitted his mistake and took full responsibility of the situation.

Philippines’ Pia Wurtzbach, who was then standing contently beside Ms. USA was then confused on the situation, however as realization dawned on her, she apologetically and gracefully took her rightful place as the title holder of the pageant.

Netizens took to social media their congratulatory messages for Miss Philippines and their emphatic messages to Miss Columbia. Harvey was quick to show the result card where Wurtzbach was named as the rightful winner. Nobody expected that the pageant would end in such a colorful way.

When Harvey went down the stage, he posted his apologies to the two ladies though his Twitter account, but he later deleted it when netizens are quick to comment that he misspelled Philippines in his post. He later reposted his apology with the right spelling.

This is the Philippines’ first win after 42 years of just coming close to bagging the crown. Philippines had been consistent in getting into the top 10 of the pageant, yet it is Wurtzbach who succeeded in finally winning the title. A lot of netizens also praised on how graceful the 26-year-old Filipina handled the situation.