Home Abroad No Classes from November 17 to 20 to Give way for the...

In accordance to the Asia Pacific Economic Cooperation (APEC) leaders’ meeting that will be held on November 17 through November 20, the Office of the President announced that there will be no classes in National Capital Region through the whole APEC meet.

According to the Department of Education (DepEd) memorandum cited by the Malacanan Palace that was issued on August 10 and 18 by Luz Almeda, Director of NCR DepEd schools division, there will be no classes from November 17 to 20 to give way for the APEC meeting. 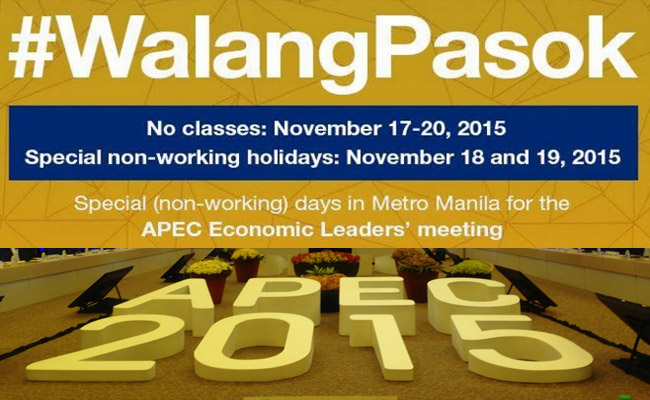 With Proclamation No. 1072, President Benigno Aquino III declared the days November 18 and 19 as special non-working holidays through out the whole NCR.

The APEC leaders are set to meet in Pasay City, at the Philippine International Convention Center (PICC). APEC is consisted of 21 countries, despite its name it does not only include Asian countries. It is a primary forum on the economic issues and development. The members are the Philippines, Australia, Brunei Darussalam, South Korea, Indonesia, Japan, Malaysia, New Zealand, Thailand, Canada, Chinese Taipei, People’s Republic of China, Mexico, Papua New Guinea, Hong Kong, Singapore, Chile, Peru, United States, Russia, and Vietnam.

As the Asia-Pacific economic forum, APEC aims to support sustainable economic growth in  Asia-Pacific region. Pushing for free and open trade and investment, APEC promotes regional economic integration. It stands as an arena for stakeholders to exchange plans, concerns, ideas and opinions.

The idea of having an economic platform was first brought by former Prime Minister of Australia Bob Hawke in his speech on January 31, 1989 in Seoul, Korea. In ten months, 12 Asia-Pacific economies had met for the first time in Canberra, Australia and established APEC. The founding members of APEC are Australia, Brunei Darussalam, Japan, Korea, Canada, Indonesia, Malaysia, the Philippines, Singapore, Thailand, New Zealand, and the United States.