Attorney Raymond Fortun of Fortun & Santos Law Offices had recently posted in his personal Facebook account his dismay with Cebu Pacific’s service. He even said that he will sue the airline to teach the company a lesson.

He and his family had originally planned a trip to Ho Chi Minh from November 16 to 19. The lawyer had recounted his experience which started on November 14. He had recieved an email from the Cebu Pacific Airlines saying that Manila is a no fly zone on November 19 due to the APEC Summit from 6am til 6pm. Since their flight is due to land by 4:445am, he wanted to confirm if their flights are included with the canceled ones. 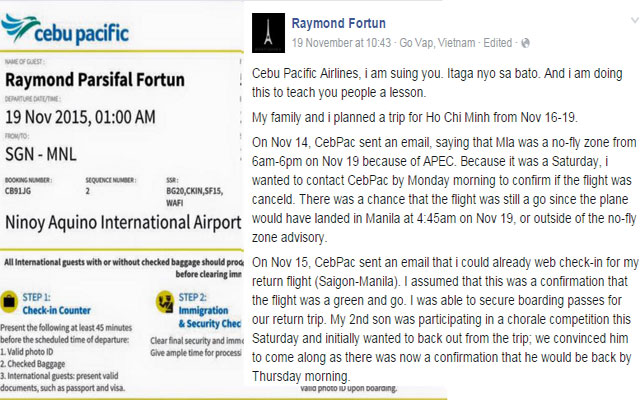 By November 15, he once again received an email from the airlines saying the they can use the web to check in for their return flight. Since they are even able to secure a boarding pass for the return flight, they assumed that they will be back in the country on Thursday morning, however, on November 18 at 10:45 am, they were told that their flight was indeed canceled. The staff said that they were sent an email saying about the advisory of canceled flights, but the lawyer claimed that he did not receive any.

As of date, the lawyer shared that he and his family are stuck in Saigon with ruined weekend plans including his son’s participation in a chorale competition and the lawyer’s anticipated golf sessions with his nephews who just came from states.

The furious lawyer also shared that they are shedding unplanned expenses due to the canceled flight. He also said that there are other Filipinos suffering the same fate. Attorney Fortun vows to sue the airlines.

However, Cebu Pacific Airlines released a statement to the media that the emails sent to the passengers about web check in for canceled flights are computer generated and they were automatically sent. Source: Raymond Fortun