Amids the public outrage against the so called ‘tanim- bala’ scheme, a source tries to reveal how the scheme works between the partnership of a ‘spotter’ and airport security screening personnel.

According to ABS-CBN News, a reliable source revealed that a spotter will be the one who will choose a passenger to be victimized. They will only need a few seconds to drp a bullet in the poor passenger’s bag or luggage. 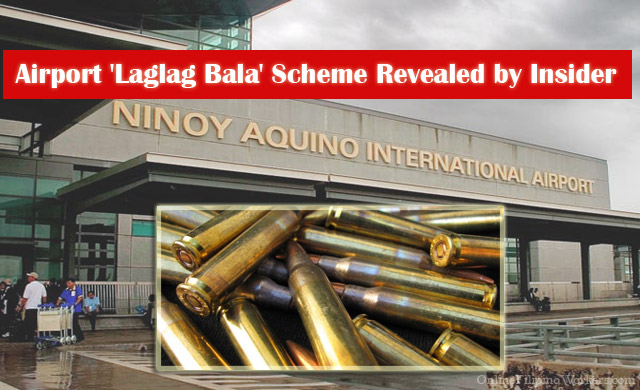 Since the scheme has been going on for 20 years, those behind the syndicate already knew the blind spots of the installed airport closed-circuit television (CCTV) cameras. They also know which CCTV’s are broken, thus they can choose the perfect spot to where they can easily plant the bullets.

The source under anonymity also shared that the spotters usually choose passengers who are going to board connecting flights regardless if it is a international or local destination. Spotting a perfect prey is easy for the spotters since they can easily tell a passenger’s destination just by looking at the balikbayan box destinations. They will know who will will be required to go through strict security check again.

The spotters will distract the chosen passenger and with a slight of the hand, they can plant the bullet in just a few seconds.

The ABS-CBN News’ show also shared that before the scheme was exposed to the public, the syndicate could victimize a minimum of 20 passengers a day and they could even get as much as hundreds of thousands of pesos a day since their victims would rather pay than be troubled. Around 40% goes to the spotter while the airport security who was part of the modus operandi gets 60%. Since the scheme was exposed, those in the syndicate had been more careful with their actions. The spotter could also blend with the crowd and choose a victim.

The source also said that the security screeners do not even have high salaries, yet some of them have expensive cars, able to travel abroad and could send their children to private schools. Some even have mistresses. And since they have to keep up with their lifestyle they needed to always get by with the laglag-bala scheme.

Since the modus operandi has been exposed by a victimized OFW who was on her way back abroad, people had been in outrage. More victims surfaced and more such cases were heard on the news. Some say that there seems to be lack of action from the government

Passengers are advised to be more vigilant and keep all of their bag’s opening locked and secured. They must also keep their luggage in sight at all times and do not accept anything from strangers.