Even before Mayor Rodrigo Duterte has announced his decision to run for president in 2016, a group of businessmen has pledged to donate P1 billion to fund his campaign. According to the said group, they desire to rid the Philippines from corruption, crime and illegal drugs. The group, represented by Benigno Gopez, assured the public that the said amount would have no strings attached. 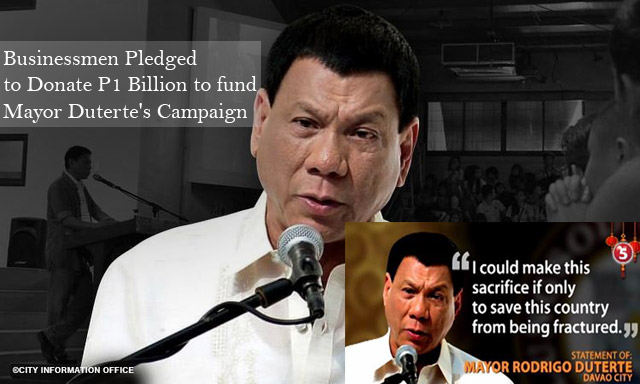 This was in reply to Duterte’s statement that he could not run for President because he did not enough finances, and he refuses to ask money from other people. He also gave a statement that he would retire from public service after his term. However, a group of supporters urging him to run for the highest position in public service has gathered at Quirino Grandstand last Saturday.

To tone down worries that the money that the wealthy businessmen would be willing to donate is going to be used against Duterte in the future, the spokesperson of the group assured the public that it would not be used to gain the favor of the government. The group’s members, who mostly refused to be identified, have faith that Duterte would be able to solve the country’s major problems.

According to Atty. Aguirre, there is a huge chance that the Davao Mayor would heed their call for presidency. He asked for some time from his supporters to do some soul searching though. He also promised his supporters that whatever his decision would be, he would not stop from helping his supporters. Source: ABS-CBN