After months of speculations, supporters of Davao City Mayor Rodrigo Duterte are given more hope that he will be running for the presidential race in 2016 when his political adviser, Lito Banayo, told the media that Duterte will indeed run.

On October 10, 2015, Banayo told the GMA News that the mayor will run for the presidential seat next year. Though confident about this revelation, Banayo also shared that Duterte still had not decided on the date when he will formally announce his decision to run for presidency. 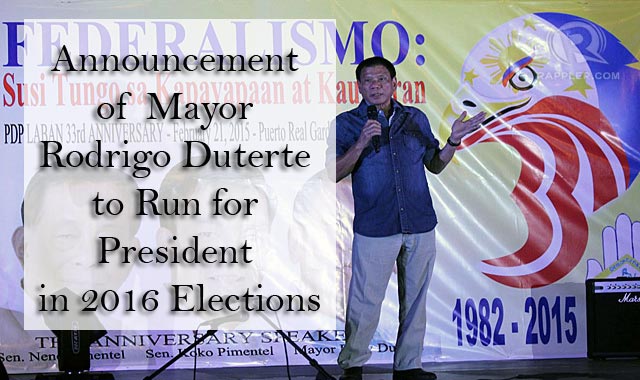 It was on Friday when Duterte told the media that he will still wait until October 15 before he declares his decision wether to run for presidency, yet no exact date was given. The filling of Certificate of Candidacy for all all electoral position will be on October 12 till October 16.

Duterte had said more than once that he is not going to run for presidency as he lacks budget and his family is against it, however his supporters had even gathered in Quirino Grandstand last September to convince the mayor to run. The mayor then sent a message saying that he needs some time for ‘soul- searching’ and will give his answer well before the filing of Certificate of Candidacy ends. He even promised that he will not disappoint the people that supports him.

Wheb Banayo was asked who will be tha Davao Mayor’s running mate, he said that it was yet to be decided.

It was no secret there there is a possibility that Sen. Alan Peter Cayetano could be Duterte’s running mate after the senator had officially declared that he will run as a vice president. He then had a meeting with Duterte in Davao and had set another one in Manila. Cayetano claimed that during their meeting, Duterte did not mention if he will attempt for the presidency, but instead they talked about the current issues in the country, particularly the issues on the live of the OFW’s.

There are also some speculations that Duterte might run with Sen. Ferdinand “Bongbong” Marcos Jr. as the lawmaker had also officially announced his candidacy for vice president’s office.

Banayo shared that the list was drafted during a meeting last Wednesday night with Duterte.