Twenty five million tweets in just twenty four hours from Filipinos all over the world. Truly an amazing feat all for just one love team. 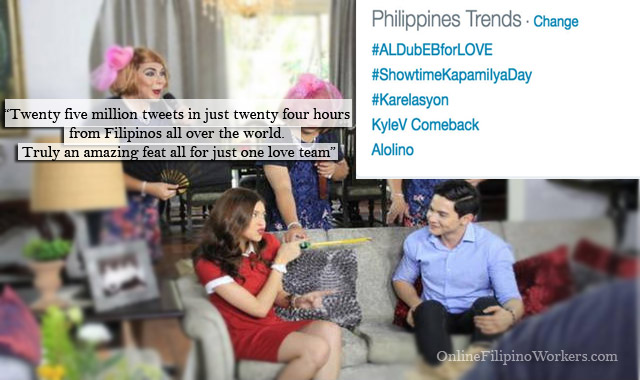 From one of the spectators who participated in the tweeter party that marked ALDUB in the history of the Twitter world, it was such a memorable experience. I never really cared about my Twitter account and mostly use Facebook as social media. I could not deny, though, that I enjoyed my afternoons watching Eat Bulaga after AlDub was discovered. I would not go over the premise of why I loved them because surely, each audience has a different opinion about it. I would, however, go through the reason why I spent many hours of my Saturday tweeting about #ALDubEBforLove. It started from three or five tweets per week just expressing my thoughts about certain episodes. But a week before the first ‘akyat-ligaw’ episode, some admins from fan page accounts called out that the rival show would be cooking something big for September 26. Some admins called for support, while others said just enjoy the show. 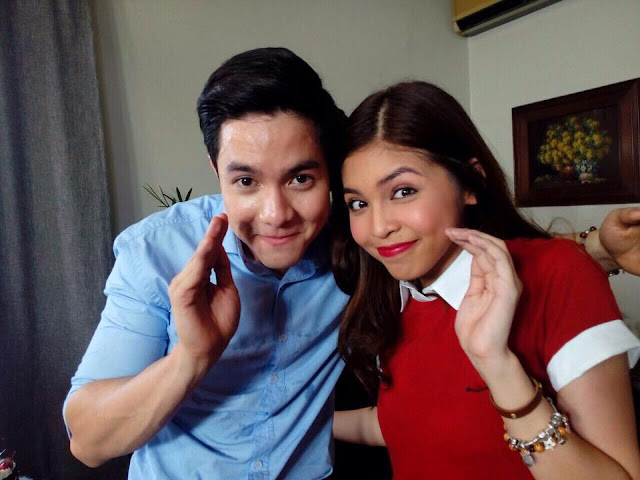 As I said earlier, my Twitter was rarely used and I probably only had thirty followers and a few tweets since I created the account. From those number of followers, I only knew five of them. It was no surprise since most of my friends use Facebook. I was determined to partake in the twitter party, though, even if I did it alone. However, the day before the big day, I was surprised about the number of people following me. It turned out some of my friends and relatives had created new Twitter accounts or revived their old ones to also tweet support for ALDUB.

The official hashtag to be used for each day was usually released at midnight by fan page administrators. For the Saturday episode, though, it was decided that Eat Bulaga would be the one to pick the HT(hashtag). A few hours before twelve, ALDUB fans noticed that the rival show has released their hashtag and was currently trending. I could say everyone waiting for the official hashtag grew anxious. Most fans were making fun of the experience, though, comparing it to New Year’s Eve when everyone was patiently and excitedly waiting for midnight fireworks.

Then at exactly twelve midnight, the official EAT BULAGA twitter page released #ALDubEBforLove as the official hashtag. And just like New Year, tweet rockets flew. It was indeed a ‘party’. Some fan pages conducted games, Q&As and some just posted about their ALDUB experience. In just one hour, the hashtag #ALDubEBforLove gained TWO MILLION tweets, surpassing the rival show’s HT which was released way earlier.

It was a really fun experience because everyone was friendly and accommodating. From thousands of tweets, I had usually encountered five or six negative tweets which was quickly turned down by most fans. EB host, Joey De Leon was playfully releasing short video clips of himself dancing for each million tweets the fans achieved. It was a lot of fun that I failed to notice it was five in the morning, and I had to go to sleep. I left the Twitter world at five, when they hashtag was trending at five million tweets.

In the morning, though, I was just peeking for some time, and tweeted lesser, but the vibe was still on. Even before the show started, the number of tweets was nearing twelve million. When the show finished, it was nineteen million. But the fans were not near from stopping.

Later in the afternoon, fans noticed that the hashtag on the Philippine Trend List only had hundred thousands of tweets. Everyone panicked, since most had given their effort to achieve the millions. Until some fans noticed that on the trending list, it was #AIDubEBforLove, wherein the letter ‘L’ from the word ALDUB was purposefully replaced with the big letter ‘i’. Some fans concluded it was a sabotage since a page from the rival network was caught trending the incorrect hashtag. Fan page admins were quick to do some damage control, though, assigning three or four people to track fans using the incorrect hashtags and encouraging them to delete and post anew. They also quickly disseminated the information to all other ALDUB fans. The incorrect hashtag, however, gained almost two hundred thousand tweets.

Nonetheless, the day ended with 25.6 million tweets. It surely broke a world record somewhere. Everyone who participated was joyful. It didn’t matter if they tweeted only one or a thousand. Everyone was congratulating each other for the amazing feat.

I believe that the pair deserved it. I believe that by the number of tweets they gained, producers and advertisers would notice and not deny the impact these two people have.

I am an avid EB fan since I was young. It was a way to repay the countless laughs they gave and the endless entertainment they would continue to give.

I love being part of the so called ALDUB Nation. It is a group of talented, smart and loving fans who gives their all-out support. This fandom exemplified unity and ‘bayanihan’, traits that Eat Bulaga continues to instill on its viewers.

Other people pointed out that tweets are just free and not convertible to cash. However, the love, effort and determination that the fans poured out for those tweets are PRICELESS.