In line with the Bureau of Customs issue regarding balikbayan boxes, a customs employee who happens to defend the opening of balikbayan boxes for thorough checking seeks the help of NBI agents. 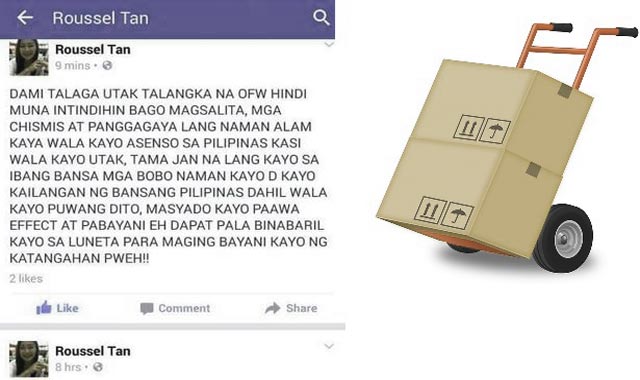 According to RouselTan, the BOC employee, said that she keeps on receiving negative comments online after she posted her personal thought about the issue. She added that her name and photos were spread out online tagged with undesirable comments which is a clear violation of the cyber bullying law. She is now determined to file the case with the help of the cyber bullying department of NBI.

Tan added that she didn’t want to cause any harm or disrespect OFW’s because she also have relatives abroad. She said that she’s just defending the side of customs who’s just doing their job to stop smuggled products. According to her, she’s not the one who insulted OFW’s because there are already a lot of dummy accounts spreading online using her name and photo.

Just recently, Aquino stopped the opening of balikbayan boxes and just settled in using x-ray scanners and k-9 units. The physical examination of boxes shall only be done if suspicious shipments were made. This will be much favorable especially to OFW’s who will conduct a “No Remittance Day” this coming August 28.

Migrant workers were truly dismayed by the issue after seeing balikbayan boxes being opened and treated like a trash by some of customs authority. Luckily, the issue is now properly addressed.