This is how Filipinos live nowadays. We work to live; such a meager existence. All this time, our heads turned and turned, looking for an answer. Why is poverty rampant in the country?Is it because majority of the Filipino population is lazy? Are we not working hard enough? Do we spend too much money on luxury or useless things? Sadly, this image shows that it could be beyond those reasons.

Having a gross salary of seventeen thousand a month could only mean one thing; you are either working in Manila or you have a managerial position in the province. At the moment, the highest wage rate exists in NCR at four hundred eighty-one pesos. 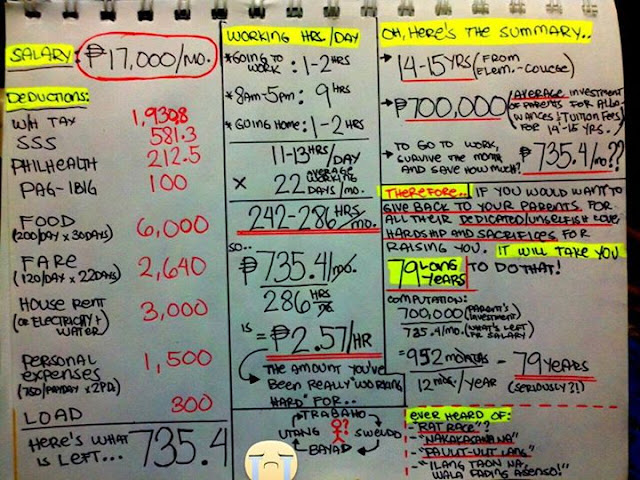 However, if you are under Region IV, you could have a daily minimum wage of two hundred ten pesos or a staggering four thousand six hundred twenty pesos per month! Sadly, prices of basic commodities are almost the same everywhere else in the Philippines. So if a worker from Manila allocates six thousand pesos as food budget, what would happen to the other worker whose salary is less than that?

Funny Comparison of a regular employee and a maid. 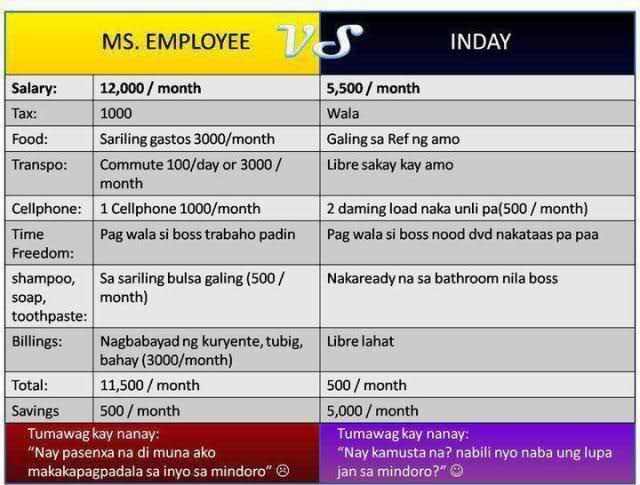 Contrary to popular belief, Filipinos remain as slaves up until now. We are slaves of capitalists who would do anything with their money to keep and multiply their wealth even further. We are slaves of politicians who are supposed to serve us instead we work every day and we are obligated to pay taxes that most of them would squander anyway. We are slaves of debt that we accumulated simply because what we have is not enough for what we need.

We were freed from the Spaniards, the Japanese and the Americans. Heroes fought, bled and died for this freedom. But who would save the Filipinos from this new kind of tyranny? Who would grant them financial freedom?