Eduardo Manalo, Head of Iglesiani Cristo, didn’t hesitate to expel his own family, mother and brother, from their church after exposing online a so called death threat. The Head minister of INC announced this after hearing about the YouTube video made by his brother pertaining that they are in danger. 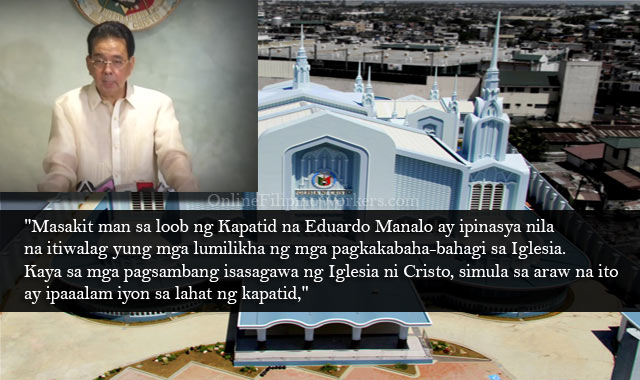 According to Santiago, the decision of their leader was very painful but he still decided to do so for the good of their religion. He added that this news will be spread throughoutthe members of Iglesiani Cristo starting today. Santiago also denied the accusations about the YouTube video of Angel and Tenny.

In the video, the younger Manalo states that they are asking for help because their lives are in grave danger. He introduced his mother but her face was not in the video. She introduced herself as the wife of late KaErdy Manalo. She is appealing to their brethren for help. She added that her children, Angel and Lottie, are also in danger.

Here is the Video Asking for Help

She also mentioned other ministers who’s been kidnapped until now. She asking for mercy for their families. According to members of INC, it was really the voice of KaErdy’s widow.

This powerful church stood still after so many years. it was Eduardo Manalo’s father who ruled the church for too long making it stronger and influential.