A United States Airway flight from La Guardia Airport, New York City, New York crashed into Hudson River, also located in New York City. Police investigation says that the cause was made by a bird that was vacuumed inside the turbine causing to malfunction.

What would be a reason for a bird to bump an enormous airplane? Well statistics say that some airplane crash incident causes are bird collisions that flew into airplane engines. Bird strikes cost Airway companies around $1.2 Billion per year in terms physical damages, flight delays and also flight cancellations. 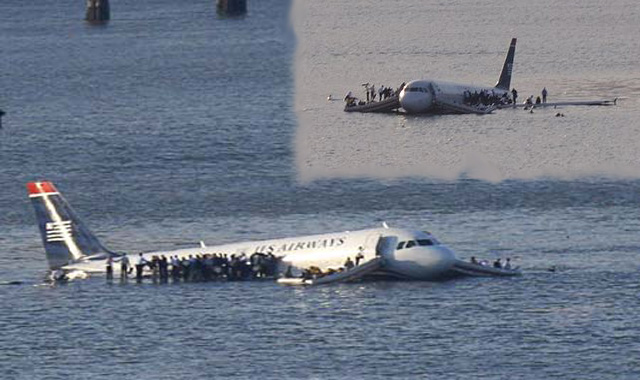 Airway Companies has a solution in this certain issues that cause a lot of money and problem, by making a device that makes a sound to alert and distract birds that are flying in airport area. They are also planning to change flight routes depending on migrating seasons.

How the pilot did made a successful landing and saved the 155 people? Well Pilots are well trained to fly with one engine running; certain techniques were being made in order to do the trick. They call it water ditching, a formal term for emergency water landing, when approaching the landing area, the pilot needs to calculate the swells that are forming and may land parallel with it, or on the top and back side of the swell. The landing gear must not be lowered, since it will make a friction and will cause to a failure landing attempt. Another tip is to maneuver the plane before it hits the area to make a smoother effect.

Question, what is the safest way to make an emergency landing, Land or water?
Scientific explanation says that Pilot must land in ground, a 200 miles per hour speed will just make the water as hard as an asphalt, and even hard for the recue team to get near in the plane.
70% chance that passengers may survive in Airplane crash based on a statistic group in America.

It is a group of team compose of Coastguards, Air Patrols, Department of Defense, local police enforces in the area with the ability and capable of having rescue equipment, ambulance for emergency.