Philippines and Vietnam Armed Forces held a football, and tug of war competition at a South China island last Wednesday while the Chinese Government building up artificial islands

The activities held on Northeast cay 2.7 kilometers (1.7 miles) away from Southwest Cay which is under the supervision of the Vietnamese Government, same place where the competition took place a year ago. 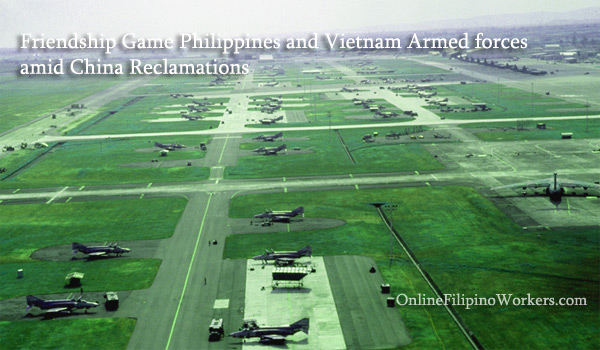 An interview with Vice Admiral Alexander Lopez (Philippine Military Commander of the Spratly islands) happened, and he willingly told the media about the events happened during the competition.

He said that it was navy to navy confidence building. He said that they also played volleyball and sack race, common games being played by the both party.

Troops also played volleyball and held a sack race, navy spokesman Colonel Edgard Arevalo said, adding that it was not immediately known which side won the games.

Colonel Edgard Arevalo also opened a discussion about the event and their aim, “to promote camaraderie and understanding, telling that it is an enhancement of cordial relations.

The Northeast Cay where the game took place is a 12 hectare island with a leaf shape sandy place is under the Kalayaan Municipality.

70 Kilometers away is the Subi reef, the nearest island under the control of the Chinese Government.

The main intention of the event was to show some solidarity against the China’s intention of building Military facility on a disputed island.

Recent news related to this issue was the warning signal made by the Chinese Military base to an American flying unit that happened last week; it has similarity on what Chinese Military being done against the Philippine Air Force.

The Malacañan Palace released a report about President Benigno C. Aquino’s intention and plan about the issue happening against China, looks like telling that they will stand against building Chinese Military facilities in a peaceful manner.