This tiny and adorable octopus was discovered recently. Some people say it is adorable, some says it is cute, but one thing is for sure! This newly discovered cephalopod will be loved by scientists and researchers around the world.

California based researchers are still finding for an appropriate name/ call for this octopus, no confirmation where released but they may call it as Opisthoteuthis Adorabilis. Maybe some will call it weird but majority will say it is cute. 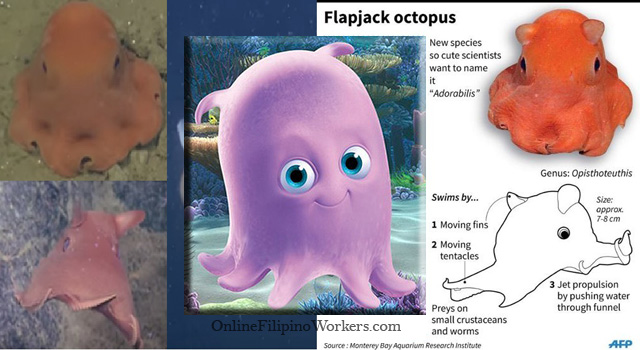 Stephanie Bush of the Monterey Bay Aquarium Research Institute said that after a year of study she is preparing to submit a report to a scientific review that would confer a name on the species, a form of Flapjack octopus.

Monterey Bay Aquarium Research Institute Scientist Stephanie Bush stated that she will submit a scientific review that will also confirm that creature/ specie’s name, but she already confirmed that it is Flapjack Octopus.

Researchers and Scientists surveys found out that every year new set of species are coming up to show their identity to the world, hard to describe new species they said.

Other new species scientific reviews were already submitted like the White Crested hummingbird, Italian scientific for the creature is Lophornis adorabilis.

Aside from this little creature, there are 12 kinds of species (female) in review with no information available to the Public. Stephanie stated that the creatures on test mimic like stones, staying on the ground.

Research Team of the Institute managed by Stephanie is conducting tests and even incubates octopus eggs; the study and development shows slow and may take two to three years.

This octopus can only be in the pacific, found 200 to 600 meter below sea level where the temperature is suitable for their harmless body.