The Ex National Rugby League Star, Ben Ross was taken to a Hospital due to fatal broken arm while in a contest in Channel Nine’s Live TV broadcast Arm Wrestling competition with his colleague Ex-NRL Wendell Sailor. 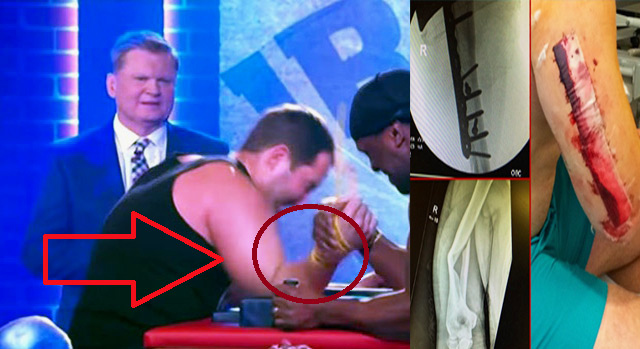 I personally watched the Video of the Arm contest and it is terrifying! I did not expect that a man who is in the field of sports (rugby) may have a chance to break an arm, he is physically fit and then everything goes wrong, even the TV show audience was terrified by the scenario. This will make your sleepy head goes alive!

Everyone knows Ben Ross, a premiership winner last 2003. The Arm wrestling TV broadcast was just a test for both ex NFL super star to know who has the strongest arm in terms of arm wrestling. In just a matter of 5 seconds, the poor bone just snapped and made Ross feel the pain. I’m sure it was painful; the snap was clearly heard even in the video footage. With the help of emergency response team of the TV network, he was brought to the nearest hospital to check Ben’s broken arm.

The TV Host Beau Ryan was seen so distressed on the footage; Oh come on everyone will feel the same after witnessing the event. Paul Vautin who was concerned about Ben Ross’ situation seeks for help. The TV show tweeted about Ross’ situation, they said he is already in the hospital “in good spirits” resting.

Here is the Slow Motion video

After the locomotion, Big Ben himself tweeted and gave thanks for all the calls, and messages “wishing a fast healing process” he received regarding his broken arm.