Trending news in the Philippines about a false advertising made by EMGOLDEX spread out in social media sites. So what is happening?  This was all about a denial made by our famous song writer Aiza Seguerra, the issue started recently in his IG account @CySeguerra. He tweeted about the conflict between himself and the EMGOLDEX. 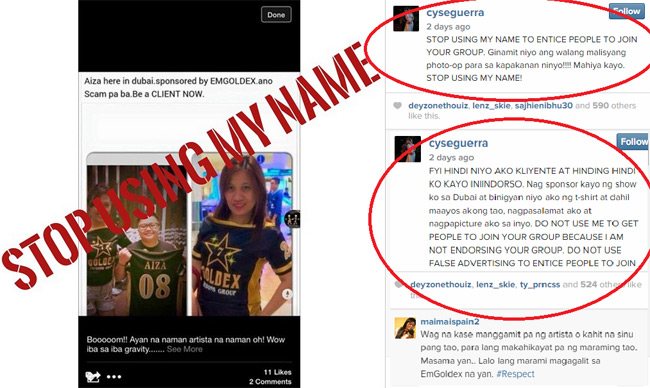 Aiza Seguerra denied that she was promoting/ advertising the said Investment team, she further explained that she has no connection with the Team. What did Aiza denied about EmGoldex? Here it is, the Investment team posted a photo of Aiza Seguerra wearing an EmGoldex shirt. Some members of the Team are insisting that Aiza is now an EmGoldex client! They are also starting to make hash tags about Aiza as a client.

Aiza explained and tell the truth that the EmGoldex Team sponsored his concert abroad, (specifically in Asiana Hotel’s Boracay Night Club Dubai) but he has no intention to promote the Investment Team. He just allowed an EmGoldex member to take photos with him while holding an EmGoldex T-shirt with Aiza and 08 printed at the back of the shirt.

Aiza was terrified about the issue; he begged to stop using his name, image and the photos under EmGoldex products. He further complained and said that the Team should regret on what they had done.  “I’m not a client” he said.  He also twitted a warning (maybe filing a case?) to stop using his name to entice people.

You may check Aiza’s Instagram account for more information regarding the issue. Do you have any experience related to the EMGOLDEX company?