If you are a Fan of Philippine Basketball Association, you will be surprised and laugh at the same time what happened last Wednesday, 27th of May 2015 during the clash of Barako Bull Energy and San Miguel Beermen.

Rico Maierhofer unintentionally lost his right shoe after a lay-up shoot, unluckily and unknowingly used his right shoe to block an offensive play against the rival team San Miguel Beermen. 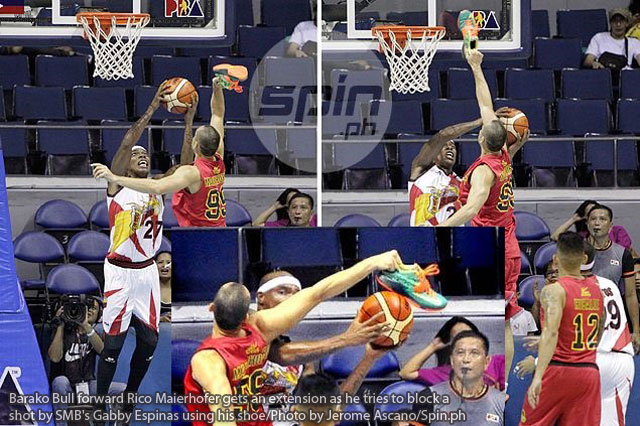 The play is still on going and we could not make another a call (foul) because we already got a penalty. The game was live, and I still had my shoe on my hand, It is obvious to use your hand to defend, But my shoe was in my hand which cause to include in my defense.

He gladly discussed it to the media about the situation. He stated that it will cost them if he got a penalty, and he considered it as a smart move for his team, he also opened a discussion about what he thinks to be a basketball player.

Most of you had witnessed this one of a kind situation in PBA History, The Shoe block made by Rico Maeirhofer.

Update: PBA Commissioner has given Barako Bull’s Rico Maierhofer with a P20,000 fine for “using a foreign object as an aid in performing an offensive or defensive move.”