To those who are waiting for the Result of March 2015 Teachers exam. Professional Regulation Commission (PRC) with the Board of Professional Teachers (BPT) releases the results of the March 2015 Licensure Exam for Teachers (LET) online. Examiners of 12,103 passed the examination out of 44,144(27.42%) for Elementary level while 17,904 passed from 56,596(31.63%) takers for Secondary level. Together with the list of passers are lists of the top 10 passers and the top 10 performing schools. 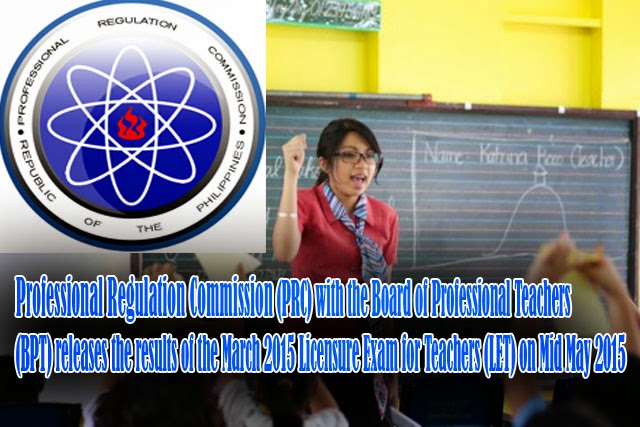 While PRC conducted the board exam, it is the BPT that created the test. BPT is composed of Chairman Dr. Rosita L. Navarro and three members Dr. Nora M. Uy, Dr. Paraluman R. Giron and Dr. Paz I. Lucido.

Exam takers needs an average of 75% and not rating of less than 50% in any subject to pass the LET. The expected release date of the anticipated list of LET passers will be on May 11 to May 22. The date was estimated according to the 27th-36th working days after the test was given. Passing the LET is required for teachers to have their license and the result must be released not later than 31 working days as mandated by PRC Resolution No. 2014-874