A video of a group of Koreans reacting to the photos of Filipino celebrities is going viral. Posted on May 15, 2015, the video had already been viewed almost 300,000 times on YouTube with almost 2 thousand likes in just three days. 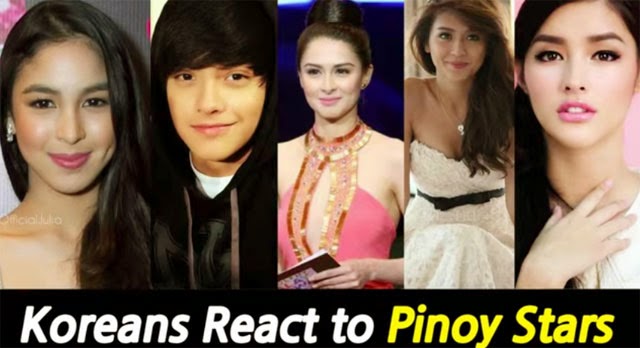 The three pairs of Koreans showed and shared various reactions of how the Filipino celebrities fare for their standards. The celebrities shown were Kathryn Bernardo, Julia Barreto, Marian Rivera, Liza Soberano and, the only guy, Daniel Padilla.

All of them admired the beauty of the Filipino celebrities but some are surprised when they discovered their ages. Some say that the Filipina actresses Soberano, Bernardo and Barreto, looked older than their real age. They were actually surprised to learn that they are just teenager, or same age as the highschool students in their country.

Marian looked younger than her age and many said she has light skin. Others also say that the Filipino celebrities might want to look mature. Some netizens reacted that the reaction could be different based on the chosen photo they were shown.

Others also say that the celebrities looked like westerners. In the end they were asked to choose the best. Many had chosen Liza Soberano.

Many netizens asked to include other photos of different Filipino celebrities. Many who watched the video appreciated how honest the comments and reactions the Koreans gave to the photos. The video had been posted by KoreanStarTv on YouTube.