Justin Bieber once again made social media abuzz and this time it is not only because of a surprise appearance in Ariana Grande’s concert, but it was because of the talked about ‘handy’ gesture on April 8. 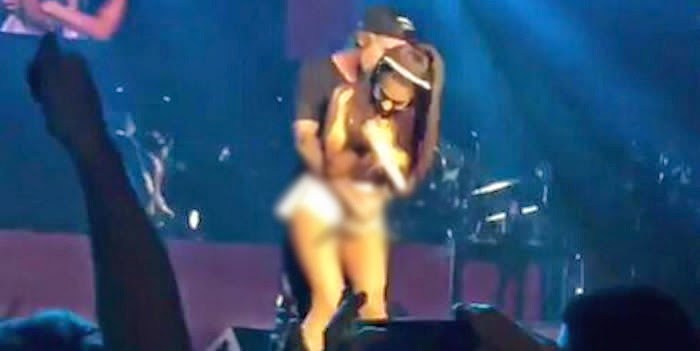 As part of the ‘Honeymoon’ tour, Ariana Grande’s concert in The Forum in Inglewood, California had been packed with her fans and they were surprised to see Bieber up on stage. Singing ‘Love Me Harder’, as part of their promotion for their single together, Bieber sung the duet with high spirits. He seemed to have enjoyed sharing the stage with Grande and even coax her to move in front of him.

Grande seemed to have hesitated for a split second, but did what he said. She had no idea that he would put his arm around her waist in a very intimate way. She was evidently surprised and got shy, suddenly moving away from his arms.

Big Sean A Hoe For Allowing This To Happen Last Night And Being There As Well, Got Your Chick Bagged By Beiber pic.twitter.com/rj3MNYXMZd
— Shawn (@winningalways_) April 9, 2015

Ariana Grande is in a relationship with rapper Big Sean, Kanye West protege, and her beau had reportedly threatened Bieber about his actions on stage. The Tweet was also put down and Bid Sean denied posting such messages. TMZ later confirmed that the Tweet was a fake.

Bieber and Grande are under the same manager, Scooter Braun. Bieber also made an appearance in Grande’s concert in Miami. Despite forgetting some of the line in ‘Love Me Harder, Grande was quick to step in for him.

After the gig in Grande’s concert, Bieber Tweeted that he is inspired to go on tour again. He is currently working on his fifth album in which there are hints that the songs will be about his emotion with regards to his relationship with ex, Selena Gomez