Home Abroad The Making of Skydriving Scenes From Fast and Furious 7 is not...

Fast and Furious 7 is raking cash and as expected it is packed with screeching tires, high speed drifts and bumper to bumper extreme car action, but why will they stop there. Fast and Furious 7 even features ‘skydriving’, making very expensive cars drop from planes for real, no CGI effects. 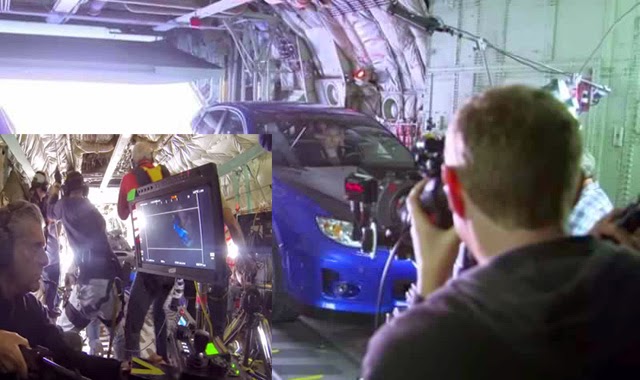 It is so realistic nobody might believe it is real now that we are at the age of CGI effects that seemed real. Even late Paul Walker’s character is made with the CGI technology, but the dropping cars were done in the old fashion way.

Dom, Brian and the rest of the team need to rescue the hacker from the mercenaries’ hand. The hacker invented a God’s Eye,a computer program that can track a specific person just by tapping digital gadgets. The team needed to find a way to get to the mercenaries convoy right in the middle of mountainous roads. The way they see it, they have to drop down from C-130 cargo plane and hopefully safely parachute down to safety and towards the target.

The film’s productions from the previous installments had joined it one grand skydriving filming in 2013 in Colorado and Arizona. The footages were made possible by a team of professional pilots, skydivers, cameramen with a couple of helicopters and cargo planes. They are headed by Fast Five and Fast and Furious 6’s second unit director/stunt coordinator Spiro Razatos together with Fast and Furious 6’s stunt coordinators Andy and Jack Gill.

The team had to make the filming perfect in just one try, their calculations must be exact for the right spacing of the falling cars, for the best footages and for everyone’s safety. Andy Gill shared that everytime they go back to filming, they always look for ways to go an extra mile, further than they previously did.

There were three camera flyers, all with camera helmets and parachutes. According to the aerial camera flyer, Luke Aikins, they were free falling at 130-140 mph while shooting at two falling cars with a helicopter flying with them.

The team ended dropping the cars at 12,000 feet. They needed to figure the spacing as the cars fall very fast but they seem to have minds of their own as they will suddenly change speed and direction. Camera flyers needed to maneuver around the car, and under the hood just to get the best shots of the unmanned cars. In the end, they are satisfied with its perfection. Spiro Razatos shared that it was the most incredible part of his life.