The megafight between Manny Pacquiao and Floyd Mayweather Jr is on its way on May 2 and whatever happens to the fight, Pacquiao’s career will still go on and may even stir to politics according to Bob Arum. 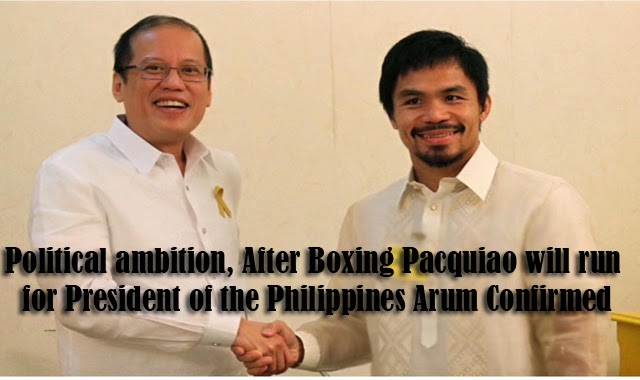 Pacquiao will surely have lineups of interviews, opponents and strategists after the fight but according to Team Pacquiao’s promoter, Bob Arum, Pacquaio will turn to politics once he goes down of the boxing ring for good. He shared that Pacquaio’s ambition do not just end to being a congressman, a position he currently holds, nor even just being a senator. Pacquiao might even run for presidency.

He told TMZ Sports that in the future, when he had already retired as a boxer, Pacquiao will run for the President’s office in the Philippines. When Pacquiao’s singing career was brought in, Arum brushed it off saying that they should forget it because Pacquiao will be a president in the future.

At 32, the Filipino Boxing Icon was elected as a congressman in the House of Representatives in the Philippines and in 2016, according to Arum, the Philippine Pride will run for senatorial. Then, maybe in 2022, he will be going for the office of the President of the Philippines.

Arum even added that Pacquiao seems to have a political career. It had been reported that Pacquiao recorded his entrance song for the upcoming bout entitled “Lalaban Ako Para Sa Filipino”. Maybe winning the bout can be part of his political campaign.

Manny Pacquiao is still to make his statement on his plans for his political career.