A new modus which uses solicitation papers to steal phones and other gadgets has resurfaced with Lyn B.’s Facebook post of a video and her experience with the person. Allegedly, she was doing her laundry in Quicklean along Katipunan. While waiting, she sat in front of the counter using her laptop and her phone just beside it when a man in white shirt and shorts with a pile of papers came in and walked around and approached her. 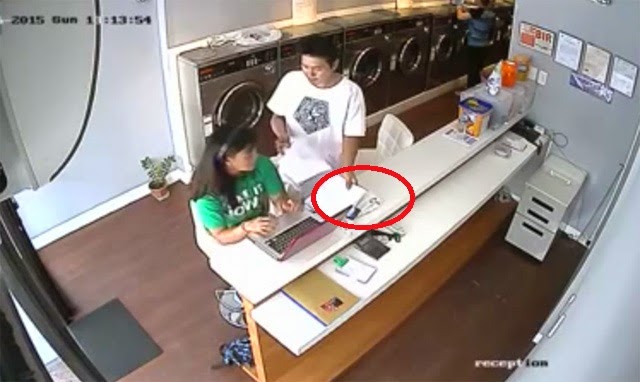 In the CCTV video given by the establishment owner, one can see the man giving a paper to the woman and being rejected, kept pestering her. While she was distracted, the man uses the other pile of paper on his hand to cover the phone and slowly reached for the phone and got a hold of it. The conversation ended when the man said, “Iiwankonalangd’yan. Balikanko next time.” (I will leave this (paper) here. I will come back for it next time) He then left the establishment, went away riding at the back of the motorcycle with his friend taking her phone along with him. The victim traced her phone to BoniSerano, Marikina area until it lost connection on which the phone was probably turned off by that point.

Last year, on the month of May, a man also claimed to be a victim of the similar-looking person. It happened in the gastro-pub restaurant in Bonifacio Global City. On his story, he left his phone on the bar top to get some lunch thinking it was safe since his friends are inside. When he comes back, his phone was gone and his friends told him that a man went in and solicited to them while covering his phone with a pile of paper—the same tactic used to Lyn B. He confirmed the happenings on the CCTV video.

In any case, this has been happening since last year or even earlier. It is important that one should be aware of his/her belongings even if he/she is in an establishment. Be wary since gadgets nowadays are very important in terms of communication. Personal information in the phones can be used against you, as well. For now, the man’s face is now on the police blotters, and hopefully will get caught. Source