Last Sunday, April 22, 2015, after the concert of the Script, a Facebook status regarding the broadcast journalist Doris Bigornia has reached thousands of netizens. With the given title: “The Dark Side of Doris Bignornia”, Richard Lim narrated his experience in the concert as the broadcaster and her daughter Nikki and several other people blocked his and his son’s view. 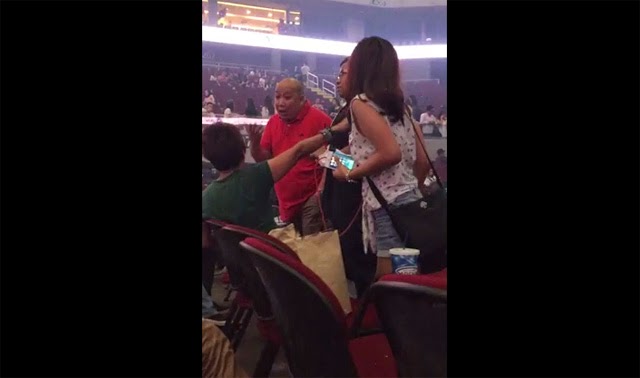 It was said that the event bouncers already instructed the group who rushed to the stage to go back to their seats explaining that it was a seated concert. However, Doris who is also known as “MutyangMasa” shoved off the bouncers and didn’t mind them. People kept running off to the stage while resisting the bouncers causing chaos, and spilled food and drinks.

Doris shouted, “Paalisin n’yo muna lahat bago kami umalisdito.” The poster then asked her, “Ma’m favor lang nahihilo na ang anak ko baka pwede naman tumabi na kayo para di gumaya yung iba,” on which she replied, “Wala akong paki kahit mamatay s’ya dyan.” The post continued with more heated arguments including the broadcaster’s son telling them to ‘f””ck off’ as well.He also mentioned his stand against television personalities acting as such when instead they should be the one who should ‘behave’ so others will follow their lead.

Moreover, videos have been posted in various web sites on which the person who posted the status and several other people hope to reach the ears of the ABS-BCN management.

It caused a ruckus and questions on Twitter and Facebook. Nikki Bigornia responded to the status, tweeting “There’s always two sides to every story.” Some netizens were definitely disappointed with regards to the behavior of a television personality.For some others, they are still askingwhether the post says the truth and are waiting for the response of the Doris Bigornia.

How to Register and Get Tax Identification Number TIN Online

ofw-admin - April 26, 2015 0
business
TIN Tax ID Number is so important that according to the law, only one TIN can be given to an individual. It has to...

ofw-admin - April 28, 2015 0
Government
A new modus which uses solicitation papers to steal phones and other gadgets has resurfaced with Lyn B.’s Facebook post of a video and...

ofw-admin - December 10, 2014 0
board-exams
The list of Passers for The Civil Service Exam- Paper and Pencil Test (CSE-PPT) Examination last October 26, 2014 was released by the Civil...

How To Get Rid of Eye Bags: Quick and Long Term...

ofw-admin - August 20, 2015 0
health
Do you experience the ill effects of eye bags or circles? Eye bags are the result of maturing, however they can likewise be brought...