Home business Curious of How Much is the Income Taxes of Top Philippines Elite...

Bureau of Internal Revenue (BIR) had recently released the list of the top individual taxpayers for the year 2013. As BIR is alwauys on the news, running after celebrity and famous people who had been said to evade tax, it is interesting to know how much are the top billionaires paying. 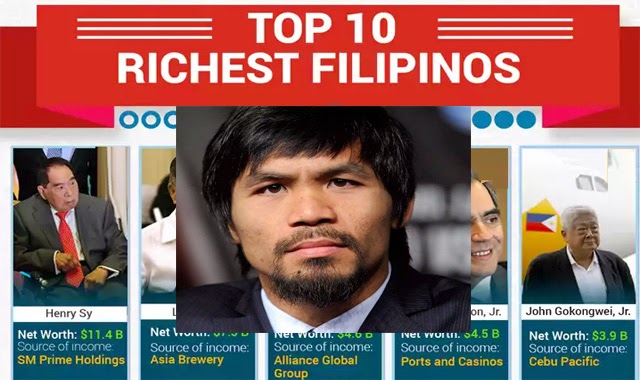 Henry Sy, Sr, SM’s founder may be the richest man in the Philippines but he is not the top payer as of 2013. Emmanuel Dapidran Pacquiao (Manny Pacquiao), our very own boxing icon ranked as the top most tax payer for the year 2013. He had paid BIR Php163,841,863.00 for the said year.

Andrew Tan, chairman and founder of Megaworld Corp.ranked in number 5 in the list released by the BIR. The department shared that Tan paid P67.18 million in 2013. Tan was ranked as the fourth richest person in the country and Forbe’s 330th person in their Billionaires List for 2015 having a net worth of $4.8 billion.

Henry Sy, Sr ranked on the 85th place in BIR’s list of top individual taxpayers. He had paid P18.5 million as his income tax while his son Henry Sy, Jr. paid BIR with P19.86 million, landing on the 71st spot. Teresita Sy paid P16.2 million and ranked in 97th while Hans Sy got into the 109th place after paying his tax of P15.2 million.

John Gokongwei, Jr. Was said to have paid P9.26 million as his tax ranking in the 289th place while his son Lance Gokongwei, of JG Summit paid P9.92 million and got into 254th spot.

Business tycoon Enrique Razon Jr. Ranked as the 50th top individual tax payer with P22.87 million as revealed by the BIR. Another tycoon, George Ty got 40th after paying P26.28 million worth of income tax and Arthur Ty, his son, got 73rd, paying P19.63 million.