Surname war all started after a Far Eastern University student vent out her frustrations over her surname, saying that it is fine to be called with her surname, only her family name sounds like a bad name people often use to curse others nowadays. 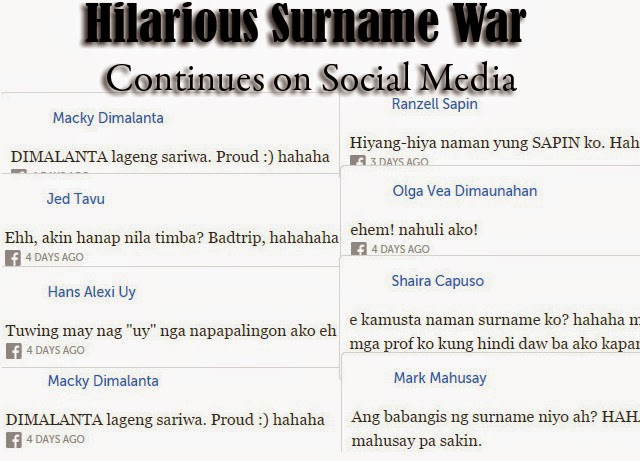 With this little rant over her family name, Ms. Beech’s vent out feelings on FEU Secret Files Facebook page started a game where Filipinos can make fun of their family names. It is common to meet people with strange name but the extra ordinary characteristics of Filipinos is to turn it into something less frustrating for themselves.

Now with more than 130,000 thousand likes and shared almost 3,000 times, the original post was followed by a long string of comments, making fun of their own family names, some are simply witty and others are just hilarious.

Netizens showed their enthusiasm instead of feeling bad about their family names. Netizen Chris Joseph Regla joked, saying that his name is rather bloody while Mica Dianne Guapo shared her experience that every time her name is called during attendance, all males in her class say ‘present’. Naid Fenis Vagina got 2,555 likes while Joyce Gagui got 3,280 likes.

Here are some of the hilarious surname comments compiled by Rappler!