Jam Sebastian, part of YouTube sensation JaMich, had recently passed away yet bashers and haters just won’t let go of his mother Maricar Sebastian and his fiance Michelle Liggayu. According to GMA showbiz the bashing prompted Maricar Sebastian to confront the hater in her recent post saying that they are only envious “Mamatay kayo sa inggit” 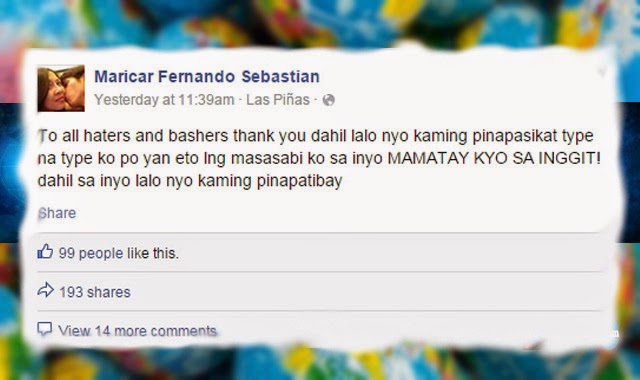 Some netizens say that the two women had been using the passing away of Jam for their own publicity and to get people’s attention. Addressing the haters in her post in a sarcastic way, she thanked them for making her and her family stronger.

Mich Liggayu on the other hand is also receiving rude comments on her Facebook and other social media accounts. Many question how she could still remain good looking despite Jam’s distress. The amount of photos she had been posting since Jam’s battle started till his untimely demise did not escape public scrutiny.

There had also been an issue that Liggayu had already found a new beau in person of Neo Domingo. It turned out the Domingo is an old friend of the on screen and real life couple JaMich. They had met when filming the short movie ‘Classmate’.

On Monday, supporters of the couple had expressed their worry after Mich posted that she felt like going after Jam. She also changed her profile picture to plain white.

When asked about the hate comments, Liggayu stated in GMA News that she just ets them be. She said that though people would always say something to them, the love of the people around her surpasses it.

Jam passed away on March 4, 2015 after months of battle against Stage 4 Lung Cancer. source