Netizens are divided yet again as another trending issue stirs the web. This time not the prestige or pride of the beauty pageant but the ‘tasteless’ hosting of Toni Gonzaga as some would label it. Last March 15, the TV host-actress got a hosting tint with actor Xian Lim for the Binibing Pilipinas 2015 pageant at the Araneta Colisuem. 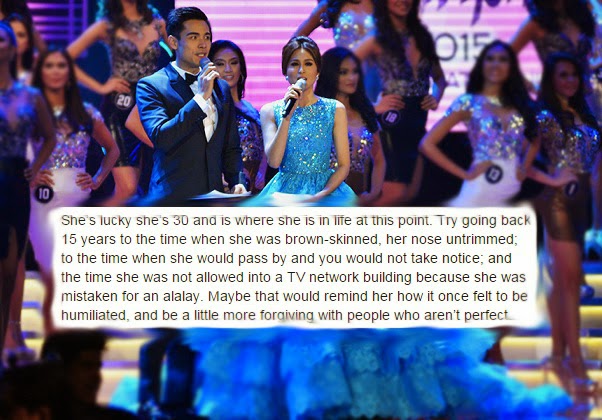 The often formal event was disrupted by Toni’s humorous remarks about the contestants and judges. Though some has found it a breath of fresh air, others called Toni’s hosting style as appalling.

One in particular who openly spoke against it was former beauty queen, Nina Ricci-Alagao. Through her Facebook post, she called out Toni Gonzaga as being overly confident and her attitude was humiliating for both the candidates and judges. 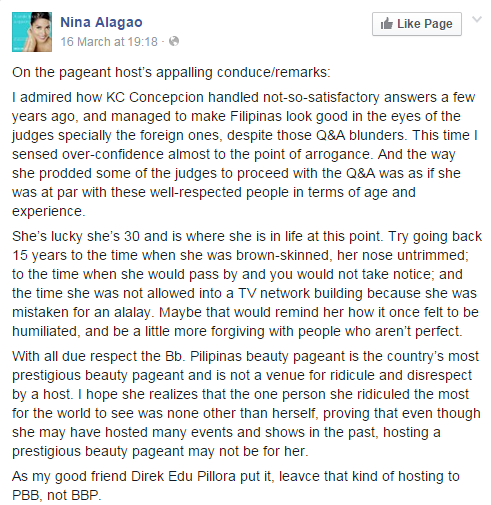 She also pointed out how Toni Gonzaga was also once a nobody so she should have been more emphatic to those candidates whom she made fun of. Hours later, she made another post clarifying her previous post. She began with an apology, most likely for the fans of Toni who got offended over it. She said she was a fan and was merely pointing out the mistake that Toni had committed for the latter’s sake.

After all the bashings intended for her, Toni Gonzaga expressed her resilience over the matter. She said that being a senior in the showbiz industry, she was already used to bashers and haters. She was also open to constructive criticisms but she never let it affect her.

Despite the critics who are against Toni, some still expressed their enjoyment of the actress’s style of hosting. They claimed she was a breath of fresh air during the pageant, and she gave something that the pageant lacked for the longest time.