With the Valentines Day just around the corner, many girls would love to have their man serenade them, however, in a circulating video Facebook a girl seemed to have different reaction as his alleged boyfriend serenaded her during her work in a famous local fast food chain.

In the said video that was posted on Facebook page named Wag kang Maarte, Hindi ka Maganda :”>, the guy was trying to keep his girlfriend in the middle of the scene as he and his friends sung Parokya ni Edgar’s iconic song ‘Harana’. The girl seemed to be smiling though she refused to stay. Soon as the clip progressed, the girl seemed to get serious to get away rom her boyfriend who held her tight by the wrists. 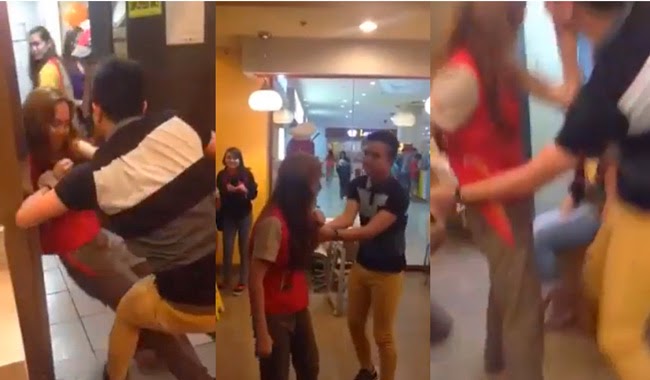 She seemed to attempted to kick him as she struggles against his grab. The guy was heard pleading her to stay even for a while, but she she still tried to get free. In the end she was able to get inside the an off-limits door. The guy’s friends told him to just let her go but for a few moments he still tried to persuade her. During the whole 2 minutes and 25 seconds clip, the girl and her boyfriend seemed to play tag, the guy trying to pull her with all his might.

The girl was wearing the fast food’s known uniform and she seemed to be at work when the guy serenaded her. The clip did not escape the various comments of the netizens. Some say that the girl was rude to her boyfriend when he was being sweet to her. She could have stayed for a while.

Others say that they sympathize with the girl who might get in trouble at work if she entertains her boyfriend. It could also be that she was just extremely shy and she was determined to have a private love life. There could be any story behind the clip and the netizens can only guess.