Home business Celebrities and Netizens on Debate for Dress that Might be White and...

A photo of a dress is now being the root of confusion of many around the globe after it was posted on Tumblr. The Tumblr user had caught the attention of many after she shared her predicament: Is the dress blue and black or white and gold? 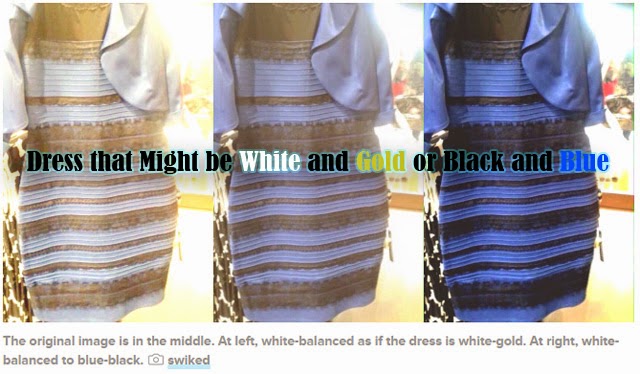 Many had admitted being freaked out by the photo. One minute it is white, then it turns into blue. Many took to Twitter in expressing their answer as they see it. As it unfolds, not everyone agreed into one answer. Many say it is white with gold lace while others say it is blue with black lace. For Taylor Swift, who had also been caught by the viral photo, she shared that she sees blue and black. Then she quipped that she was both confused and scared.

folks i do colors for a living and that dress is blue and black. the yellowish lighting is making the black part look sorta gold.
— Bobby McKenna (@bobby) February 27, 2015

CORRECT RT @notsalome: The dress is medium blue with black lace, get your eyes checked.
— Ivan the K™ (@IvanTheK) February 27, 2015

Is the dress prettier when you see it as white and gold? I don’t understand what’s happening
— Maureen O’Connor (@maureenoco) February 27, 2015

THE ILLUMINATI CONDUCTED THIS WHOLE DRESS SITUATION TO REPLACE OBAMA WITH A LIZARD WITHOUT BEING NOTICED #whiteandgold
— STOP THE ILLUMINATI (@Illuminati_Stop) February 27, 2015

I wish I had the skillz to photoshop that dress onto a llama.
— Lindsey Turrentine (@lturrentine) February 27, 2015

Contrary to others’ suspicion that is is an online photo trick, it is actually human eyes that does the trick. And the dress takes us back to the anatomy of human eye. 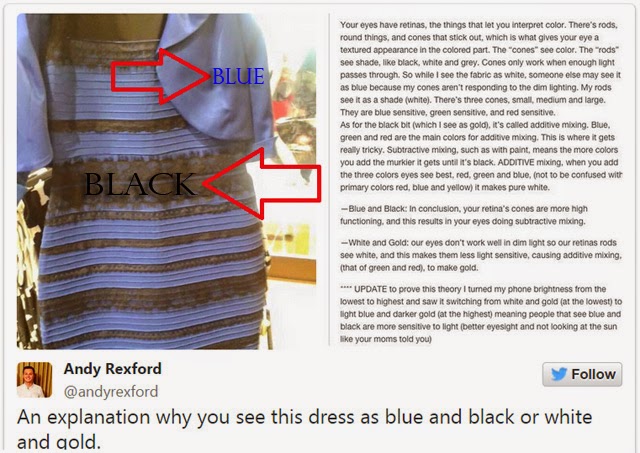 As explained by Wired, when light enters the eyes, it passes through a lens then separates it into different wavelengths. As the light hits your retina, it stimulates the neural connections and then gets interpreted by the visual cortex.

Visual cortex will the process the information from eye’s neural connection into an image. Your brain will instantly take off the light bouncing from the object you are looking at and retain the ‘color’ of the object. The way you see things depends on the brightness or dimness of the surroundings.

Try to change the brightness of your device from dim to very bright and see how the color changes right in front of you. If you print the photo and cut out the background, it is actually blue.

So what can your eyes see on the dress, is it white and gold or black and blue?