MMA watchers was given a treat and a break from serious fights in the octagon ring after a fighter brought out the Hadouken stunt seen only in Street Fighter. While there was no energy ball that had been created from his palms, Shane Campbell was able to bring out awe from the audience. 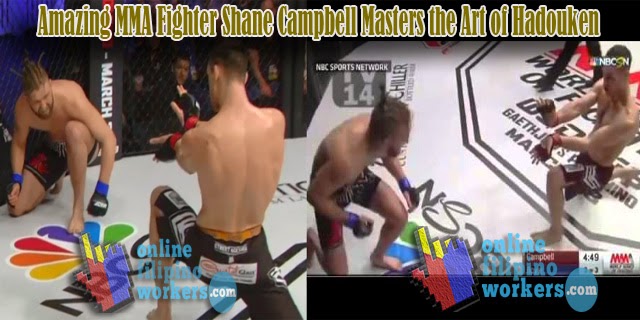 It was said that the first two rounds of the welterweight fight between Shane Campbell and Derek Boyle in WSOF 18: Moraes vs. Hill in Edmonton, Alberta, Canada had been uneventful. As usual with MMA fights, the rounds were full of action packed kicks, punches and chokes, but Hadouken was never before seen until Campbell did it out of the blue.

Derek Boyle was down in one knee after a close combat with Campbell. Cambell also suddenly got down in one knee or in a squat lunge position and trusts his hands forward like Ryu and Ken in the iconic Street Fighter. Audience cheered as they saw a rare stunt pulled right in front of them. He the proceeded to continuously kick and punch Boyle until the latter got down and rolled into a fetal position to protect himself.

Shane Campbell is one of the most popular Canadian Muay Thai boxer in North America. He had been held champion in various Muay Thai Competitions and he is currently into MMA.