Another Filipino contender makes his way to the world’s most famous stage for a singing competition. Dave Lamar, 23 years old, tried his luck on American Idol breaking the news through his Twitter account.

His tweet shows the singer holding a guitar with the American Idol logo as a back drop, even swearing that the picture was not photo-shopped. The episode of the said audition would be aired on ETC channel here on the Philippines next week. 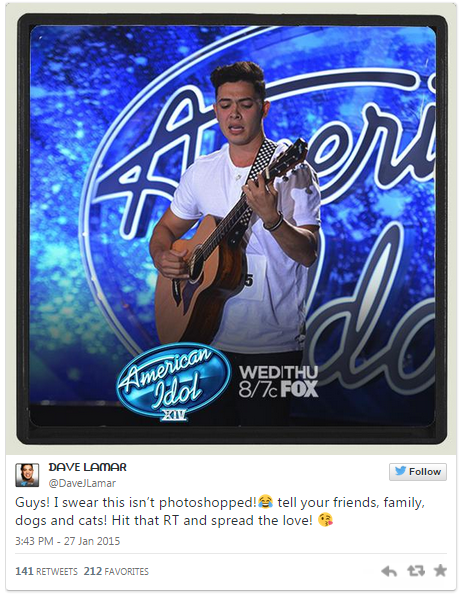 Dave, who is originally from Sariaya, Quezon, is no stranger to singing competition. He was once a contender in The Voice Philippines, capturing the attention of Coach Sarah with his audition song ‘The Man Who Can’t Be Moved’.

However, he was eliminated during the battle rounds. But even before his first auditions, he became well-known through Youtube as the other half of ‘Lamar Brothers’ as they make their own cover of top hits.

Many celebrities, including Coach Lea Salonga, retweeted Dave Lamar’s post, even expressing that she was impressed. While Lamar did not reveal the song he sang for the audition, it is also highly anticipated if Idol Judges Urban, Connick and Lopez became impressed enough by his audition to have given him the golden ticket for the next round of the contest. The audition took place in San Francisco, California.

The American Idol season 14 kicked off last January 7, holding auditions all-over the state. This season’s judges are Jennifer Lopez, Keith Urban and Harry Connick. Three Filipino contenders had auditioned for the show. They are Dave Lamar, Monica Laire and Marvin Calderon. They follow the long list of Filipinos who had made it to the famous show. However, despite the number of contestants, there had been no Filipino winner in the famous singing competition since the first season.