As Filipino Catholics and non-Catholics alike become high-spirited with the upcoming pope’s visit, several people seeking to take advantage began to emerge in different parts of Metro Manila. Pope Francis, who would have a five-day visit to the Philippines, is all over the news as many people have been anticipating to have a glimpse of him.

His pictures suddenly mushroomed all over as tarpaulins featuring him and some people seeking publicity. This is most known as ‘epal’ by the Filipino people. The said word means politicians who post their names or faces on tarpaulins or other advertising material to seek publicity or to introduce themselves to the voters.

This could take place even years before an election takes place, and is usually done in greeting people on special occasions. 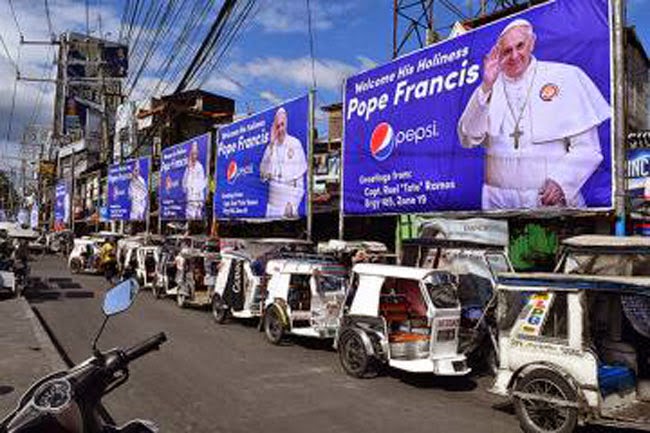 The popularity of Pope Francis was not spared from this epal action. Last Sunday, a barangay chairman had a tarpaulin with a welcome message to Pope Francis and a logo of a famous soft drink. MMDA and DPWH had then removed the tarp but similar ads had been emerging in Pasay City.

DPWH director Reynaldo Tagudando assured the public that their office would be quick to remove such tarpaulins the moment they would exist.

It had been twenty years since the pope had visited the Philippines, thus being a mostly Catholic country, the said visit is highly anticipated by faithfuls.

Politicians, who are often stereotyped in the country as tainted most of the time with corruptions, seemed to see this as another opportunity ‘to cleanse’ their image by being connected to the pope’s name.

With the elections being near, some officials had not been dignified to respect the pope, whose teachings clearly defy the lifestyle most politicians are living and following in this country. The pope himself, had condemned corruption as a worse evil sin in one of his sermons.