After a long standing between Makati Mayor Junjun Binay and the Senate Blue Ribbon subcommittee, the later finally ordered an arrest warrant for the young Binay for contempt of court. It could be recalled that the mayor was being alleged of corruption regarding the overpriced buildings in his city.

Investigations were conducted by the Senate but not with a cooperative suspect. Mayor Binay snubbed many senate hearings over time.

Then finally, Senator Koko Pimentel, chairperson of the subcommittee, gave orders to the senate sergeant-at-arms to arrest Binay and bring him over to the session hall. 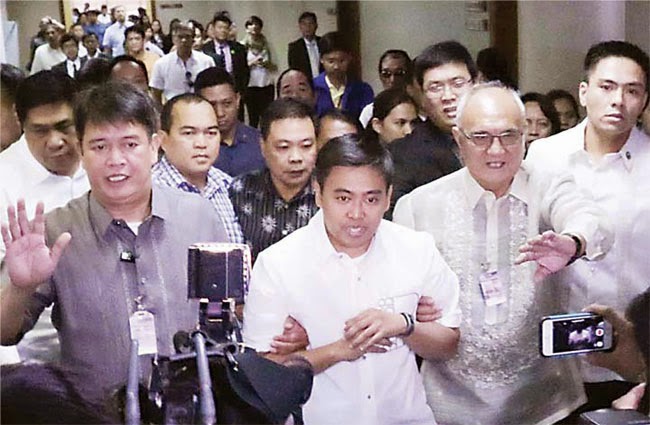 Mayor Junjun Binay, together with Makati City Admin Atty. Elene Mendoza and former Makati City Admin Marjorie de Veyra, was detained in the Senate. It was said that the mayor peacefully submitted himself to the arresting officer.
He then presented himself to the inquiry proceedings over the alleged overpriced Makati City Hall Building 2 and Makati Science High School. He stated that he never intended to wage war against the Senate but was merely protecting his own rights.
He claimed there is no longer a reason to be in that proceedings since he was already able to present his case the first time. He still refused to participate in ongoing proceeding but was still ordered free by the subcommittee. Pimentel stated that he would no longer have any chance to defend himself or give himself a chance to give inputs regarding any matter if he would not cooperate.

After the courtroom drama, the Makati Mayor made his plans of retaliation known to media. He claimed that his human rights were violated by the Senate. Another hearing is set to start on February 12 at 10 am. It is yet to be known if the young mayor would come voluntarily or again be charged with content.