The Voice of the Philippines Season 2 is now under the scrutiny of some netizens after the sudden announcement made by Bamboo that Joniver Robles had ended his race on the show because of personal reasons on January 18, 2015.

While the sudden news is interesting enough, the issue seemed to be bigger as Robles himself asked for his supporters’ help because he was allegedly hacked without his knowledge.

According to Robles’ post in his Facebook account, he did not receive any messages from either his coach and the management of the prestigious singing competition. He seemed to have waited for the last night’s episode to know what had happened to his race in the competition. 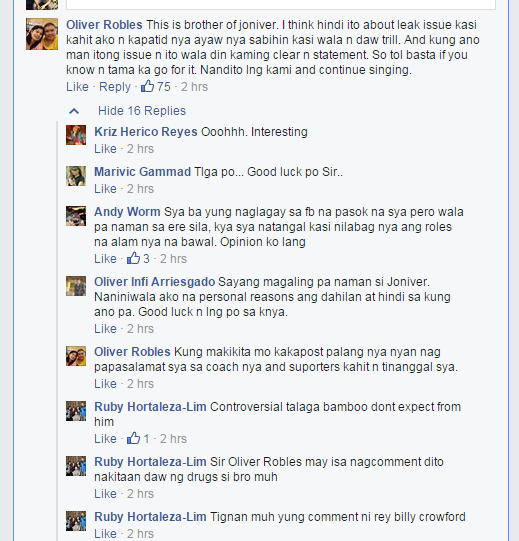 Apparently, Robles was able to get into the Top Six of Team Bamboo knocking over Rita Martinez. After the show, Bamboo had announced that the management had decided that Rita will take up Robles’ spot in the Live Shows as the singer will be unable to go on due to personal reason. ABSCBN News seemed to express that it had been a mutual decision. 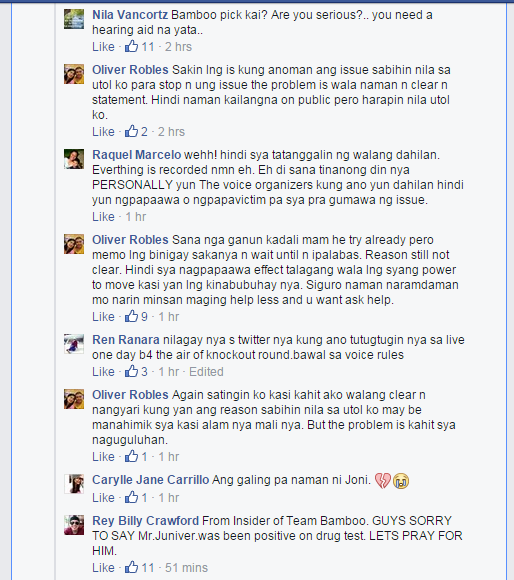 On the other hand, Robles stated on his Facebook that certain people could make up lies against him and that his opportunity was taken from him. Fans in return had asked for the clarification as to the real reason why he was cut off the competition.

While it is unclear what was the root of the issue and why he will not be performing in the Live Shows, many netizens had put their speculations in the comments section of Robles’ post. Some say that he might have violated a rule in the competition, but if so, ‘personal reason’ is not the right way to say it.

Watch Joniver Robles Last Performance aired on the Show before the announcement.

The Voice of the Philippines is still yet to make some clarification regarding the matter.