Months after her partner, Jam Sebastian, had been diagnosed with stage 4 lung cancer, Michelle Liggayu had one wish for the upcoming Christmas; that her boyfriend would be healed from cancer.

The couple, more famously known as JAMICH, was an online YouTube sensation who gained fame for uploading their self-made music videos. 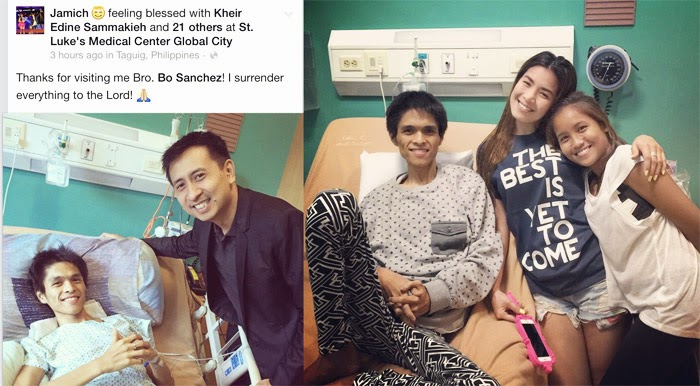 After six years of being together, the famous tandem is still going strong despite both the trials and controversies amidst the spotlight that they continuously face.

Read the full details here: Jam Sebastian is confirmed dead on March 4, 2015 around 10:30 in the morning at Saint Lukes

March 2014 marked the time of their discovery of Jam’s fourth stage lung cancer. He began treatment, thereafter, but not with financial difficulty.

Jamich’s fans were more than generous to donate proceeds to Jam’s treatments. Just last May, the couple had been engaged after Mich proposed to his long-time boyfriend in front of their other church members.

According to Jam, the happy thoughts of marrying his girlfriend and starting a family with her keep the pain at bay. Likewise, Mich’s endless hope is being fueled by their future plans together.

Along with the said fame of the couple came bashers who see pretty much every negativity from their words and actions. Others accuse the couple of hogging the spotlight, and using Jam’s cancer ordeal to be more famous.

There was also a time that he was bashed for posting his pictures online after his chemotherapy sessions. Nonetheless, thousands of fans still support JAMICH, particularly Jam whose physical appearance nowadays pretty much depict the hardships cancer had been giving him.

His girlfriend, Mich, on the other hand, continues to show support and courage to him. Despite the emotional pain she is also experiencing, she claimed to always set it aside and show a more hopeful face to him so he could be boosted with optimism as well. Nonetheless, her statements were always toned with pleading desperation.