In a latest video making rounds on the internet, a western man was shown being slapped by a Thai Monk while traveling on a train. The Australian, known as Jeff, wearing pink polo shirt and board shorts was caught on video while receiving three slaps from a man wearing an orange robes, and was obviously a Buddhist monk. 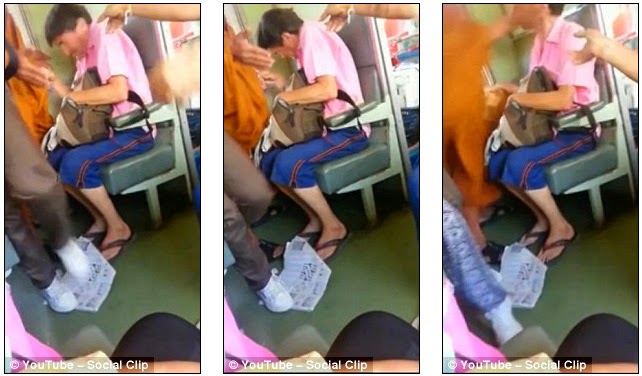 From a local report, Jeff was an English teacher based on Thailand. During the trip on the train last December 7, Jeff apparently offered his seat to two women passengers. He then sit next to the sleeping monk (whom others claim was already awake). The said monk became irritated by his action. This was further aggravated when Jeff said “Fine, fine” which the monk misunderstood as “kwai, kwai” The said word was considered offensive in Thailand and meant buffalo.

According to sources, there were more than three slaps received by Jeff before a police man arrived at the scene and escorted the monk away from the train car.

Despite this shocking experience, according to the expat English teacher, he harbors no ill-feelings regarding the monk or the incident. He stated he loved Thailand very much. He was also grateful that many people supported him online through his ordeal.

This is another case of language barrier. It is a proof that we could easily be lost in translation and offend a person from another country easily simply because our customs and traditions vary greatly. As a traveler, or even a resident in a foreign country, it is very important to know its customs and traditions very well. When using a second language, it is also important to take note of the correct enunciation because different sounds might also warrants that it meant differently. Nonetheless, hats off to Jeff for keeping his cool in a very tight situation, even keeping light about it after the said incident.