A NAIA Police Officer was caught on cam video as he broke a taxi’s window while on a heated argument with the driver. The video had been shared more than 208,303 times in Facebook in just four hours as the netizens are determined to make others and the media aware of it. Now it is trending as NAIA Police vs Taxi Driver. 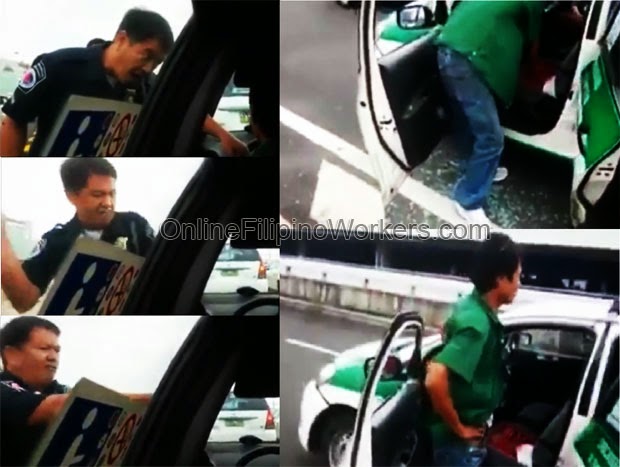 The start of the video taken by the passengers had shown the argument already full of tension. The taxi was already parked at the side of the road and the NAIA Police was asking for the driver’s license. The driver refused to give his license saying that the officer must first give tickets to those other taxi drivers who did the same violation but seemed to have gotten away with it.

The NAIA Police resorted to tapping the taxi’s hood but the driver still did not budge. To the passengers’ and driver’s surprise, the officer then broke the window at the driver’s side. The driver pointed out that the police need not break the window but the officer countered that he will be willing to pay for it.

It was evident in the video that the driver indeed made a violation. He had picked up the passengers in a no loading area. Other drivers had allegedly done the same before him and he followed suit not expecting to be flagged down.

The driver soon gave his license and he was the beckoned to come with the officer. The passengers also got down and told the driver that he should not have picked them up if he knew it was illegal. The shards of the glass was seen in the video.

Many netizens pointed out that many taxi drivers violate the rules on no loading and unloading areas and get angry when a police flags them down. Others say that the police should not have broken the taxi’s window as it shows arrogance and disrespect to civilians.