Home local The Voice of The Philippines Battle Round December 6 and 7 Episode...

Lea Salonga vented her frustration on Twitter regarding an audience who leaked the results of the Battle Rounds of The Voice PH through social media. The former Miss Saigon bluntly expressed her anger on her Twitter account and even cursing the said audience member. She even blurted her proposition to bar inviting people from outside the network to watch the taped show.

Episodes for The Voice of the Philippines are shot in advance and would air after a few weeks. Apparently, one of the people who was able to watch it posted the names of the qualifiers after the battle rounds. This sparked the series of nasty tweets from Salonga herself. 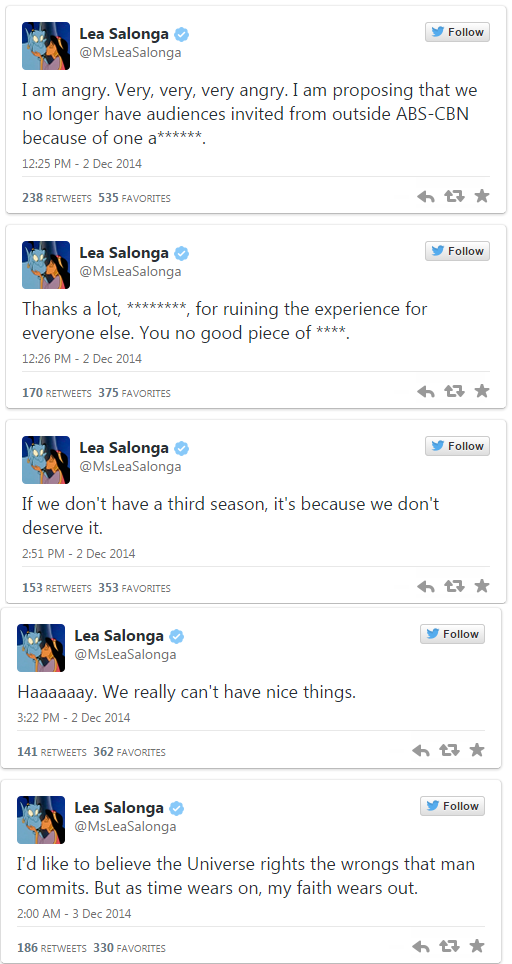 The official page of The Voice of the Philippines also posted a warning against those people who would post and have posted spoilers and leaks on their page.

Lea Salonga, on the other hand, claimed she was confident that the show would still do well even after the leakage because of their contestants’ great talents. She also encouraged people to keep watching the show because what’s important is the journey that the aspiring singers would go through in order to achieve their dreams.
Nonetheless, she still kept a bitter tone, and even continued on with a defamatory remark against the alleged leaker. 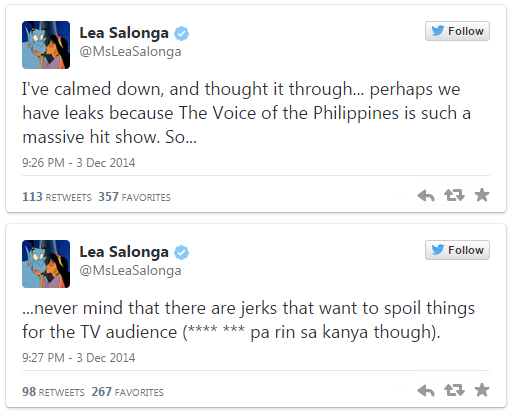 Lea Salonga, a world- renowned singer-actress, is also known for her witty, and sometimes even controversial tweets. She is one of the few artists who bravely post exactly what they have in mind without worrying of critics and bashers alike. This earned her a reputation in the social media world which made her earn both haters and fans alike.

She had been one of the coaches for The Voice-PH since it was launched in 2013. As a coach, she constantly offers her years of experience to wishful singers who pass the blind auditions.