A recent report was posted on Rappler recently describing the first-hand experience of its own resident reporter about a security guard who aimed an M-16 rifle to a crowd of patrons at the Market! Market!,Bonifacio Global City.

On a random walk to the said place, the Rappler reporter came across a commotion. He then saw a man in uniform pointing a gun at the crowd. This prompted the reporter to observe what was happening, and even record the incident on his smart phone. 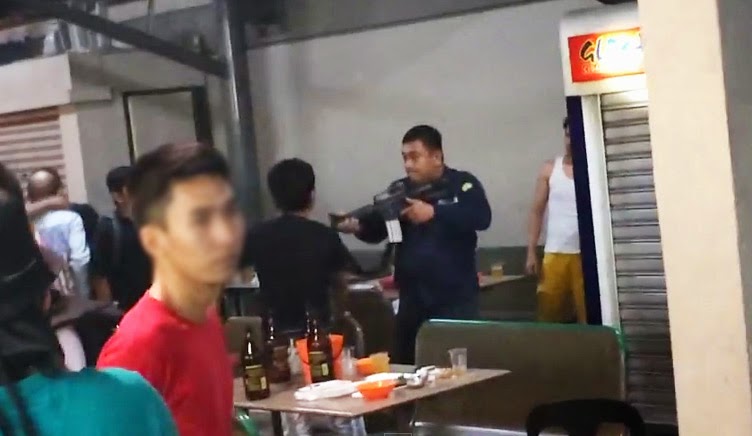 According to reports a fight broke out between two groups who had been drinking, and apparently ignored the guards on duty. Other patrons allegedly mocked the guards until the frustration caused them to drastic actions; one aimed the rifle to drunken crown and the other used a metal baseball bat to intimidate.

Excerpts from the scene were even recorded and uploaded online. Furthermore, one of the security guards attempted to confiscate the Rappler reporter’s cellphone, citing that it was illegal to record or cover the incident, and his ‘reporting’ was unwelcome.

A day after the incident, the two guards had been relieved of their post. An Ayala Mall spokesperson also assured the crowd that Market!Market! is still safe as ever, and such was only an isolated case.

However, netizens have expressed rage about the behavior of the said guards, reiterating that security guards should call the PNP when encountering this kind of problem.
On the other hand, some commentators cited that the involved security guard was usually kind and polite but it was still not an excuse for the way he acted.
Names of the two guards involved were not yet announced by the Ayala Mall management but said they would as soon as possible. However, they reiterated that the company do not and would not tolerate this kind of behavior.