LeBron James is recently being slammed due to violation of Royal Protocol. Apparently, the Duke and Duchess of Great Britain posed for photos with James after a game between Cleveland Cavaliers and the Brooklyn Nets.

James was being friendly when he gave the royal couple two jerseys for their kids. After that, he obliviously put an arm around Kate during a photo opportunity. 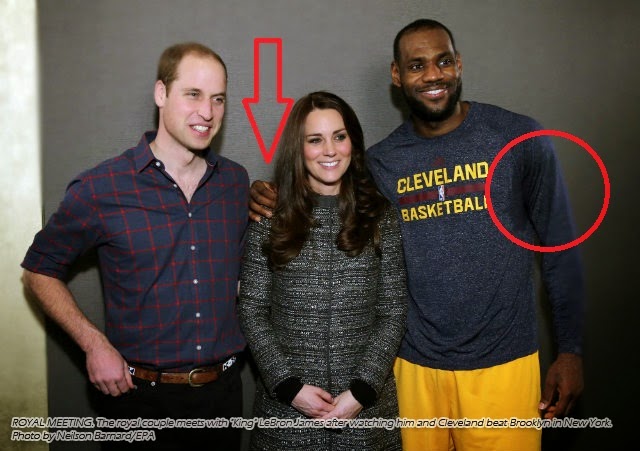 Although the Duchess of Cambridge did not show she was offended, more conservative English etiquette experts pointed out this breach of etiquette. Some reports, on the other hand, claimed that Kate was caught off-guard by the action.

“A shower would have been preferable but he had just finished a game – so even more reason for him not have opened his pits by lifting his arm and placing it around Her Royal Highness!” – William Hanson in report by DailyMail

Most Americans are touchy, traditional protocol prohibits guests from touching member of the royal family except to shake their hand. The same heated response was also generated when First Lady Michelle Obama put her arm around the Queen in 2009.
Some says this protocol came way back when monarchs were treated more with godly statures. A lot came to LeBron’s defense citing that the King may not have any idea that such protocol exists.

LeBron’s has not issued any defense regarding that matter. However, he still uploaded his pictures with the royal couple and tweeting how he would remember the experience forever.

Nonetheless, he did not upload the said controversial photo showing him with his arms around Kate. It did not stop the picture from being viral online though and prompting people to share and spread the photo.

This was Kate Middleton and Prince William’s first trip to the US since 2011. The two were married on April 29, 2011, and was considered one of the grandest royal wedding of the century. They now have one child they named Prince George of Cambridge who was born on July 22, 2013.

He is third in line to succeed his great-grandmother, Queen Elizabeth II.