Latest update reports from the weather bureau states that ‘Ruby’ (international name ‘Hagupit’) has intensified to super typhoon category. The US Navy’s Joint Typhoon Warning center spotted the super typhoon as having a maximum sustained winds of 205 kilometers per hour with gusts up to 240 kph. #rubyPH 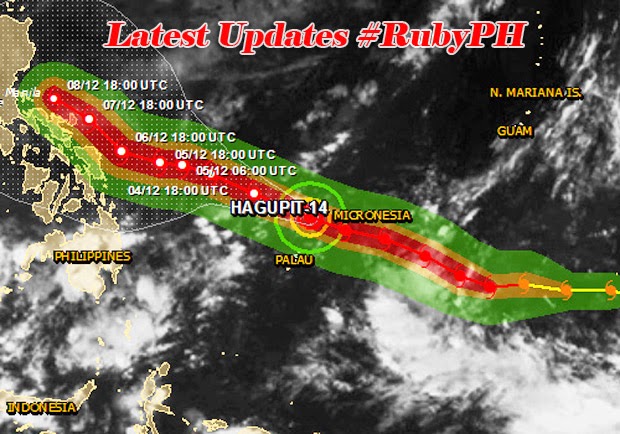 It is expected to make landfall over the Eastern Samar-Northern Samar area on Saturday afternoon. Red flags are up as President Ninoy Aquino III pressed all local government unit involved to make all the necessary preparations and preventions prior to the storm.
This includes units from the Philippine National Police(PNP), Department of Social and Welfare Development (DSWD) and National Risk Reduction and Management Council (NDRRMC). And although most people from Yolanda-hit regions are being worried by another super typhoon on the way, President Aquino is confident that remains positive that Yolanda had already challenged the country but the Philippine nation was able to overcome thus with preparation and prevention casualty could be minimized.
In another report, Hawaii-based Joint Typhoon Warning Center(JTWC) stated that there could be a possibility that the storm would head to Japan or might even not have its landfall on the Philippines.

#RubyPH Tweets
Nonetheless, it doesn’t stop local government units from their preparationsince the humungous casualty the country had experienced since super typhoon Yolanda took its toll on Eastern Visayas. At present times, some of the victims of the said disaster haven’t even been stable yet after Yolanda wrecked their homes.