They say vanity is considered a deadly sin. This seemed true after Jobelle Bascug, the girl who was labeled by netizens as ‘the most beautiful shop lifter in Cebu’ went all out to ease her vanity by indulging in a salon but failing to pay the bill amounting to P2,000.

According to the Facebook post made by the owner of the salon, Bascug arrived at their salon, last December 4. She requested a variety of salon services from Nails and Cocktails Salon. After everything was done, she claimed she was short of cash and had to run to the ATM. She then left her bag and ran out. 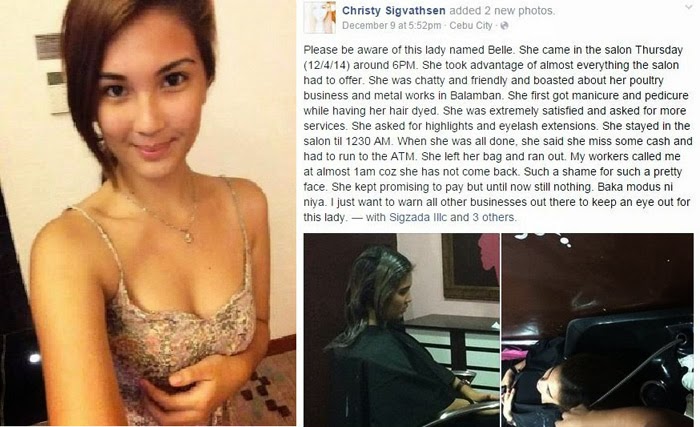 The salon owner did not press charges but then took to Facebook how “Belle” or Jobelle Bascug swindled them, and everyone should be on the look-out for her.

A few days later, Bascug was brought to the Asturias police station after she failed to settle her bill amounting to fifteen thousand pesos from a resort she had checked in since December 8. Bascug claims she was short of cash and her friend should supposedly pay her bill did not show up. The resort’s owner is planning to file estafa charges against her.

Bascug became an instant celebrity after she was caught shoplifting clothes worth twenty thousand pesos from a boutique in Mandaue City just this year.
Although the case was never pushed through since one of her relatives settled, she was still bashed online even garnering the title ‘the most beautiful shoplifter in Cebu’, truly not a flattering title.
Some netizens slammed how society perceived beautiful people pointing out that if Bascug’s appearance is less than pretty, she would not gain the same sympathy from many people.
Others even think that Bascug might be suffering from kleptomania but one thing clear is how Bascug was trying to fit in a luxurious life style that she seemed could not afford. Reference: Inquirer