Immigration Officer is facing raps from the Office of the Ombudsman for allegedly insulting Ma. CritinaBucton in an incident last November 22 where the latter was with her husband Gabriel Apostol to be assessed at the Immigration Office before their flight according to a Facebook post

Apostol, being an OFW for five years, claimed knowledge of the overall Immigration process and was trying to assist his wife, which was a first time flyer. During their first encounter, a man wearing a black jacket who was alleged IO shouted at Apostol to sit at the far-end and not face them. 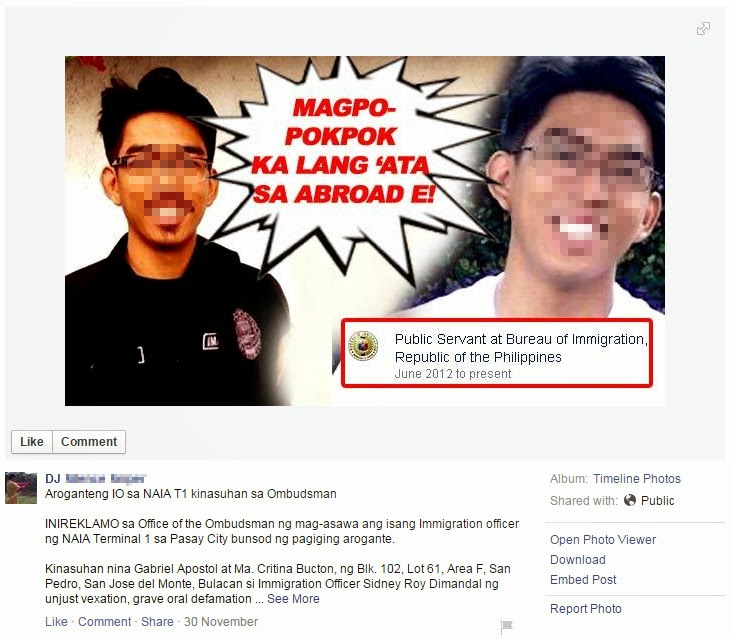 According to the Facebook post, after fifteen minutes of the interview, Bucton was heard crying by her husband thus pressing Apostol to inquiry what was the problem. At that, The I.O blurted out and demanded them to show their proof of marriage, and accusing that Bucton would only work as a sex worker (pokpok) abroad.
The couple showed a copy of their marriage certificate but the I.O claimed that the said document was invalid. He was demanding for an NSO copy which was still not possible to claim since the couple had only been recently married.
Apostol then asked for I.O’s immediate supervisor to express their concern over the IO. However, this further aggravated I.O cursing Apostol and even challenging him to complain to the Head Office. The couple claims that they possess pictures and a video of the said incident to prove their allegations.

The I.O is facing unjust vaxation, grave oral defamation and slander. He also apparently violated Section 3 of the Republic Act 3019 or Anti-Graft and Corrupt Practices Act, Grave Misconduct, Conduct Unbecoming of a Public Official and Abuse of Authority and Oppression.

In a similar report, Immigration Officer was being depicted as apprehending a Syrian national with a fake passport at NAIA from entering the Philippines. The said passenger was eventually blacklisted.

The report also included that Ma. Cristina Bucton, the same person filing the case, was barred twice from boarding her plane due to questionable documents. Bureau of Immigration records show that Bucton first claimed Apostol to be her cousin and on her second attempt claimed he was her husband.
Bureau of Immigration spokesman Elaine Tan stated their Immigration Officers are just always on the look-out for similar cases. Reference: HatawTabloid Facebook.com