An onlooker of an unusual assault decided to take out his camera and recorded a video of an incident that happened at one of the McDonalds in their area from its very beginning.

This video caught two women on tape as they went berserk after being told that they missed the menu for the fast food chain’s breakfast time. After getting out of bed a little bit too late, they threw a tantrum like immature children stuck in adult women’s bodies. 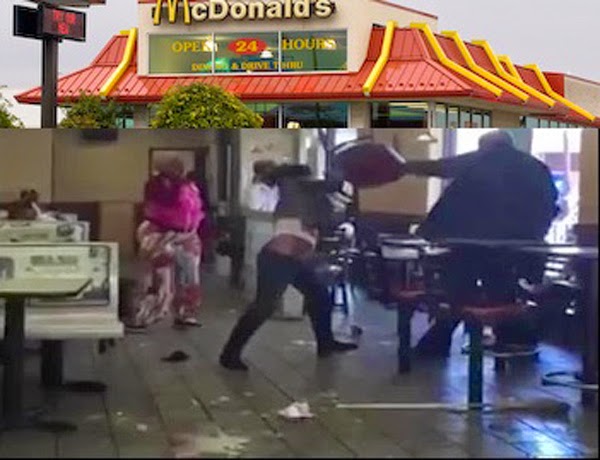 The women were seen loudly mouthing the employees for all the other customers to see and hear for the reason that breakfast was no longer being served. And as shown on the clip, the woman went from bad to worse after a man stepped up to tell them to keep calm and relax.

The man told them that the employees were only doing their job because, after all, those were the rules and rules are rules. They had to be followed.

Thinking that the problem would be solved that way, the man, unfortunately, did not see that what he did will quickly lead to a sudden escalation in the turn of events. The women commenced a full on attack as they vented their frustration out on him personally.

What started as a heated exchange of words led to chair smashing. The women directed these chairs at the man, who managed to stop these chairs before they could even strike him. Then, one of them managed to hurt him by delivering a blow to his head with a broom handle which shattered into several pieces after making contact with him.

Needless to say, these two women ended up destroying and wrecking McDonalds during their unreasonable assault.

According to My Fox Philadelphia, it is reported that the horrible incident took place at Philadelphia’s McDonalds.

What could have been the cause of these women’s violent act with just a reason as petty as missing breakfast time? Reference: madworldnews